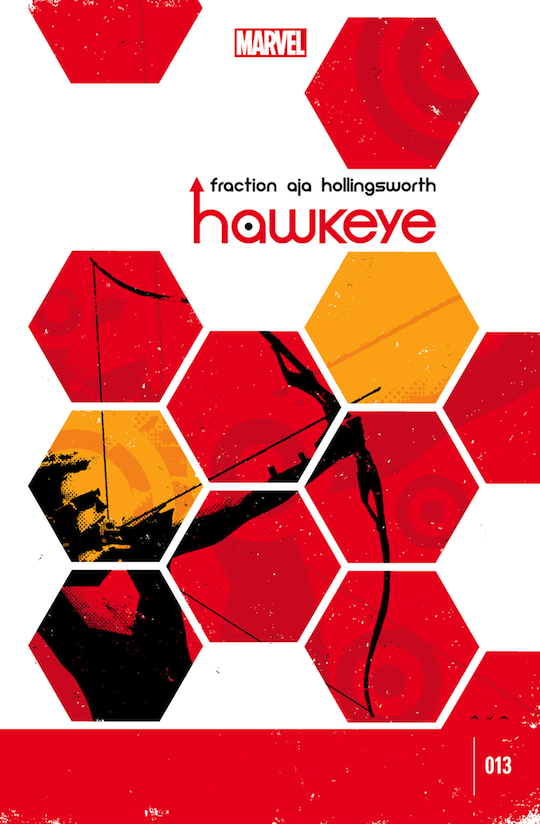 It’s been a while since the last issue of Hawkeye and even longer since we had one that spent the majority of the time with Clint Barton. Chronologically speaking, this issue takes place after issue #9 and various scenes happen parallel to issues 11, 12 and the first annual.  It sounds confusing, but it is actually quite simple. Each issue since #9 has spun out of the events found in that issue, but focusing on a different character.

Issue #13 of Hawkeye continues with the off-duty, slice of life story that has made the series a favorite since its debut. Fraction and Aja are able to hit on the emotional beats from the loss of Grills, but at the same time keep it light. This issue is very grounded in the real emotions and reactions that real people face in the real world. While humor is normally found prevalently throughout each issue, this is an issue for mourning. There are some lighter jokes to be found, but they are the kind that bring a light chuckle or smile to your face; the kind of jokes traded to cheer up those in mourning. While the characters may be talking to each other, these small jest are just as much for us as well.

As with almost every issue of Hawkeye the art is just fantastic. David Aja brings so much more to the story than what Fraction could scribe. If you look closely in the front pages of the book, you’ll notice that there are no “writers” or “artists” listed. It is just, Hawkeye by Matt Fraction and David Aja. This is one of those books that works so well, because of the collaboration between writer and artist. Hell, you can’t forget Hollingsworth either. His colors are half the reason the art in each issue is so iconic. (Issue #10 is a perfect example of this team’s amazing collaboration. Seriously, go buy it or read it again if you have it!)

Hawkeye #13 is not going to be the issue that breaks the trend of consistently amazing work by the Hawkguy team. Buy it, read it, love it.