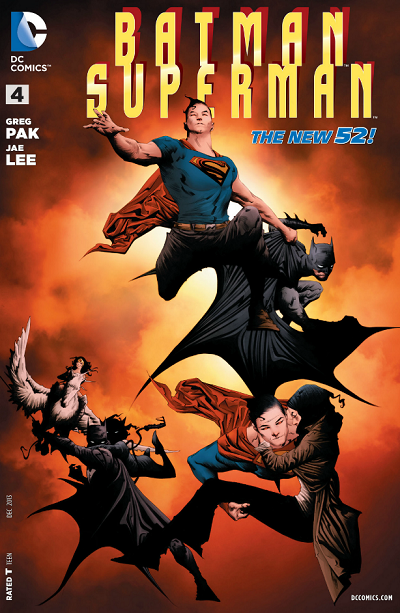 Like many, I wasn’t exactly sure what to expect back in June when Batman/Superman was making its debut.  The creative combination of Greg Pak and Jae Lee was certainly something to be excited about, but team-ups between Bats and Big Blue never really appealed to me personally.  So if future me appeared that month in a blinding burst of light and informed me of how thoroughly my expectations were about to be exploded, well, I guess I would have been very surprised indeed.  About a lot of things.  But I digress.  Pak and Lee wrapped up the first arc in their run on this title with a flair and confidence that will leave fans and former doubters alike eager for what will come next.

In this issue we find the separate versions of our two heroes fighting over what should be done with the potentially universe destroying weapon, while Wonder Woman attempts to take down the New God Trickster.  With the fate of a world at stake, can the two sides stop the horror that’s to come?

One of the things that caught many readers off guard was the ambitious nature of this storyline.  Time Travel stories are tricky beasts to tame, so for Pak to begin Batman/Superman with one made it pretty clear right off the bat that he has big things planned for this book.  Ambition aside, the story has also been handled quite skillfully.  While there have been times where the leaps back and forth between the inner monologues of older/younger heroes have been confusing, they’ve added a lot of personality to the story.  This issue especially offers some great moments of insight into the two versions of Batman and Superman, as well as into the different stages of their relationship.

Jae Lee’s distinctive art style has been a bit of a two-sided coin for this series.  There have been many instances that were visually striking, showcasing Lee’s unique perspective and sometimes minimalistic approach.  Unfortunately, the lack of backgrounds in most scenes caused a lot of confusion as well, leaving readers to wonder where or when things might be taking place.  Overall, though, his work helped to make this book and its first arc standout amongst its peers.

Buy It – Batman/Superman #4 marks the end of what will hopefully be the first of many arcs in this series.  This issue, like the ones that came before it, offered us some humor, large-scale action, and great dramatic moments.  If you’ve been on the fence about this book, rest assured it is well worth your time.