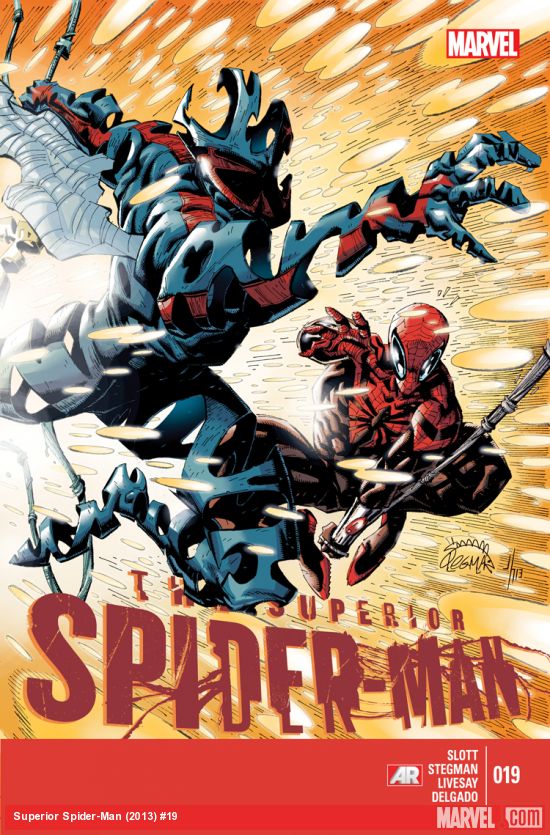 There are few things in all of comics–maybe in all of popular fiction–that can induce the kind of giddy joy that comes from a well-written Spider-Man story. I was grinning like a kid all the way through Superior Spider-Man #19, and thinking back on it still makes me smile. This issue is the end of the arc with Miguel O’Hara, the Spider-Man of 2099, but it leaves a lot to look forward to in the future.

Issue #19 picks up in Horizon Labs as Superior Spider-Man has just put Miguel down for the count. However, Sups and the Horizon team still have a temporal event to stop. Spider-Man, still possessed of the consciousness of Doctor Octopus, sets the team to work building a science machine\macguffin to stop the event. What we get to see, for the first time I believe, is just how Doc Ock screwed up by erasing Peter Parker from his consciousness. He needs Peter for the final equation to make the machine work, but the memory of the thing is gone along with Peter. It’s a great moment, and a foreshadowing of issues to come, if I’m not mistaken.

Meanwhile, Miguel is in an ethical dilemma. He wants to eliminate Tiberious Stone–architect of the 2099 future, Miguel’s own ancestor, and all around not nice guy. However, if he does so it will rewrite the entire 2099 timeline, and there are no certain fates. The whole problem resolves in a way that might be predictable but is still fun, and makes me VERY VERY excited for the future of Superior Spider-Man.

As for the art, just look at that cover, will you? I want that thing on my wall! It occurred to me reading this issue just how much Stegman’s art is reminicient of Todd MacFarlane and Greg Cappulo, especially in the faces. It’s not easy to get expression out of the Spider-Man mask, even more so when two Spider-Men are facing each other down, but Stegman works it with flare and humor that makes the book just that much better.

Buy it! Put it on your pullist! Marvel is knocking it out of the park in so many areas of their universe right now, but Spider-Man is one of the few that retains the fun, excitement, adventure, and joy of a great superhero book. If you’re not reading this, you are missing out.