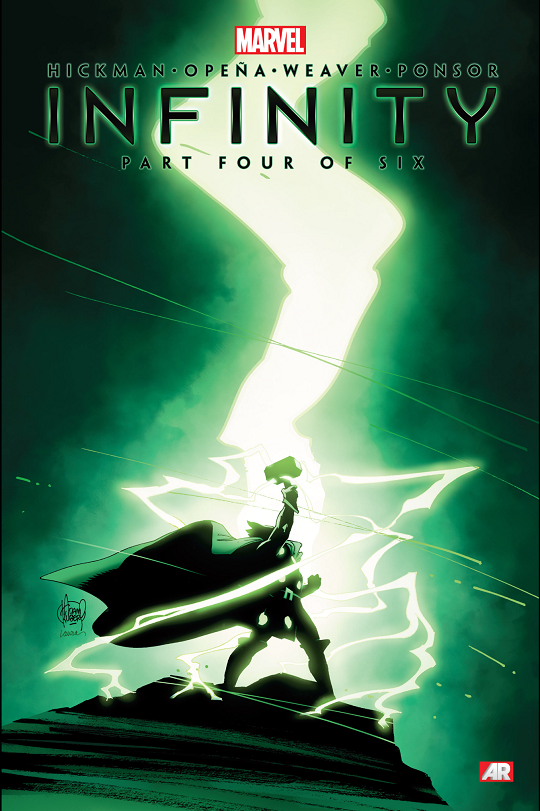 We are now over the halfway mark of this universe spanning event, and I must say that issue # of Infinity is my favorite of the miniseries so far. There is actually a lot of dialog and exposition as the story bounces from the surrender negotiations between Thor and the Builder controlling Hala to the showdown of Thanos and Black Bolt, and also to the introduction of Thanos’s Inhuman son, Thane.  It is not balls to the walls action, but what little we do get is pretty badass.

Much of the issue is the calm before the storm, and Hickman does a pretty good job of building our anticipation that something serious is about to come down on us. As you turn the page with that knot in your gut waiting for things to set off, Hickman switches us over to one of the other locations. It is mildly annoying, because you just want to see what is next, but it keeps us involved with all the various elements of the story without neglecting any. I was reading on a train, and I literally scooted by butt to the end of the seat as I hunched over my tablet.

Opena’s work centered on the events in space, and Weaver’s were for those events on Earth. While I thought both delivered some exceptional art in this issue, Opena’s style just speaks to me on a whole other level. It’s that realism in the eyes of the characters, and that little extra bit of detail that really pulls me in. The final few pages we get with Thor and the Builder on Hala are just stellar.

Let’s not forget to mention the work that the colorist can add to a comic as well. Sometimes when books have two different artists on them for different settings, there may also be two different colorists. That is not case here. Ponsor is the unifier that brings it all together.

One last note before I deliver my verdict on this issue of Infinity. Anyone interested in the upcoming Inhumanity event might want to take a look at this issue. There are some things that happen here that look like they will lead directly into that series. It actually made me question whether or not the Thanos/Black Bolt part of this whole event is connected to Infinity or just serving as a setup for the next major event. I don’t want to speculate yet, but this was one part of the issue that had me a little concerned.

Keep buying the series. Infinity is not fizzling out. When you’re done reading this issue you’ll be thinking, “That’s right! This is why you don’t mess with name-removed-for-spoilers!”