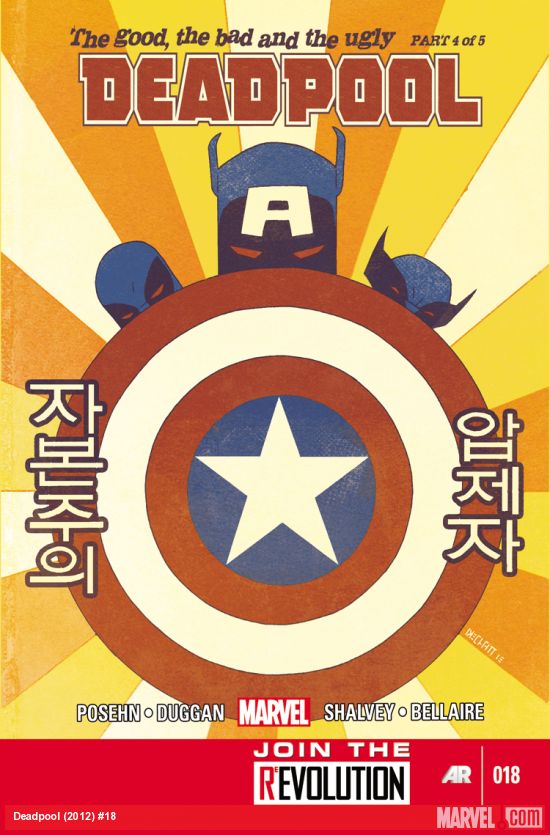 The image of the sad clown is nothing new to most people, but he poses an interesting dilemma: is he funnier for his frown, or is he just sad? Deadpool #18 leaves the reader faced with a similar problem: when Deadpool finally takes something seriously, can we take him seriously?

For the most part, The Good, The Bad, and The Ugly–the title’s current 5-issue arc–has been a very cool. North Korea, fake X-Men, organ snatchers, Wolverine (the bad), Captain America (the good), and a conflicted Deadpool all make for a compelling story. The whole thing feels a little… un-Deadpool, though. It’s very different from what I’ve come to expect from this title leading up to this, and while I’m usually all for something new, the differences make some of the story come off all wrong.

In issue #18, Deadpool and the boys are starting an uprising, out to save the families of their North Korean doppelgangers. The ulterior motive is revenge on the guy who snatched them and to find out whether Deadpool has an illegitimate child. Things get a little broody for the merc with the mouth in this issue. Wolverine tries to help by providing internal dialog as to what might be going on with Wade, but when the moment finally comes and Deadpool breaks down, the whole scene is hard to take seriously. I kept waiting for D’pool to crack a joke or fart or something.

The art in this series has been really good. I wasn’t familiar with Declan Shalvey before this, but his art has a Chris Samnee-esque quality that I like very much. It’s not overly detailed, but it doesn’t need to be, The cover of this issue is also pretty great.

Wait and see. There is one more part to this arc and there are still some secrets to be revealed, as well as some big questions as to how all of this will effect Deadpool himself. However, I really feel like this story will play better in trade. The tone, look, and feel of the story is so different from the rest of the series that it maybe should have been separate all along.