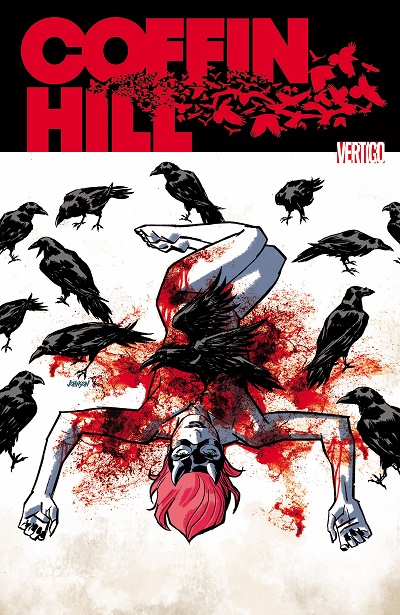 There are a lot of elements that make up a stellar first issue, the kind that genuinely makes you excited not only for its next installment but for the series as a whole.  While a lesser debut might try to pack everything into those first 22 pages (character origin, motivation, plot details, supporting cast, and so on), some go down a different path.  Coffin Hill #1 takes its time, allowing things to emerge naturally, so that the mystery of its main character and her world can take root in its reader’s imagination.  By the book’s end, you may not understand everything that is happening, but you will most likely be hooked.

Issue #1 opens with the introduction of Eve Coffin, a rookie police officer who has just caught a serial killer that’s been terrorizing the Boston area.  Before she has any time to process the aftermath of the apprehension, however, she is shot by a drug dealer while returning to her apartment.  As Eve clings to life while doctors work to save her, we begin to get some insight into her own troubled past and her family’s dark secret.

It can be hard to develop a tangible atmosphere early on in a comic, especially in its very first issue, but artist Inaki Miranda pulls it off effectively here in Coffin Hill #1.  There is a dank and rainy feel to just about every setting that seeps into your bones a little bit as you read it.  The scenes in the woods especially are quite chilling, evoking images of the deep dark forests found in the stories from our childhood and the terror they often housed.

As touched on earlier, Caitlin Kittredge shows a masterful control of pacing in this first installment.  She grounds us first in a real-world setting before lowering us into Eve’s past through the memories that flow in her mind as she’s being operated on.  She doesn’t muddle up her introduction with too much information, but you still get a definite sense as to who Eve is while receiving some delightfully creepy clues as to what may have happened to her and her friends that night long ago in the woods.  You know a storyteller is doing something right when you’re already wishing the second book was in your hands before you’ve even finished the first issue, and that is certainly the case here.  Next month can’t come fast enough.

Buy It – Do you enjoy mysteries, witchcraft, and deep dark forests?  Then Caitlin Kittredge’s Coffin Hill #1 will be right up your alley.  It’s yet another fun and creepy Halloween season read from Vertigo that will surely get you in the mood for some ghosts and ghouls.