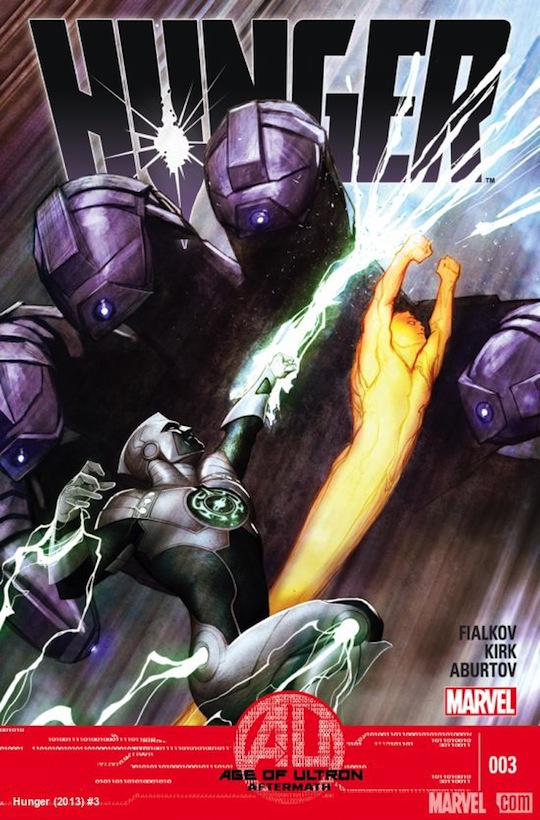 Hunger #3 picks the ball up right where we left it last issue. There are Gah Lak Tus swarm bugs hitting the beaches, Kree warriors carrying giant laser cannons, and the Silver Surfer kicking some butt to defend the Earth. Rick Jones looks a little shaken up from the previous play, but Fialkov puts him back in and calls one hell of a play on third and long.

The first two issues of Hunger have provided a decent amount of entertainment and insight into some of the more cosmic aspects of Marvel’s Ultimate Universe. After a brief fight on Earth, Rick Jones seemed to be overwhelmed and contemplates just giving up. Fialkov could have just left him out for the remainder of the issue, and brought him back at the end of next issue to save the day. It was the route I was expecting things to go, but it’s not the one Fialkov chose.

Even if you are not up to date with the current happenings in the Ultimate Universe, Fialkov and Kirk deliver with the inspiration Jones needs to join the fight, in a way that all readers should be able to get. It felt convincing enough, wasn’t dragged out until the next issue, and even got me a little inspired.

Despite Hunger being a story about the possible end of the world and the universe, the tone is still kept light. It’s serious, but playful and fun. There are a spectrum of emotions found in the art that will have you smiling or crying. This issue sets up the series for what should be a fantastic and possibly emotional end before we head into “Cataclysm.”

This issue is the best of the series so far. If you picked up the first issue, definitely give this issue a read and be ready for part four next month.