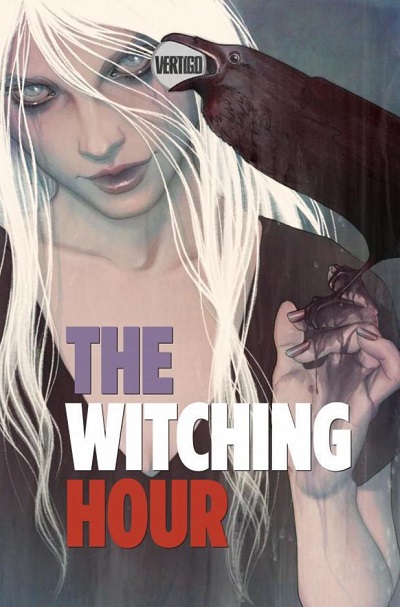 Heralding the beginning of the Halloween season with its release this week comes Vertigo’s The Witching Hour, the latest in the growing list of great short-story comic collections that have been springing up as of late.  From the recent American Vampire Anthology, going so far back as last Halloween’s Ghosts, high quality one-shots featuring entries from big name talent and promising up-and-comers alike have been on the rise, and that’s something to cheer about.  Short stories represent a unique and hard-learned skill: the ability to create a fully realized tale with fleshed-out characters in a limited amount of space.  This is deceivingly more difficult than expected, but as The Witching Hour shows us, it’s a thing of beauty when pulled off well.

Most of the stories in The Witching Hour center around (you guessed it) witches, witchcraft, or other magical happenings be they of the good or bad variety.  The range of themes found in them varies quite a bit.  Some, like Lauren Beukes and Gerhard Human’s “Birdie” or the clever history-bending tale “Fellow Travelers,” are fun stories tinged with the bitter-sweet, and serve as mood-lighteners for the anthology.

Other stories bravely face some pretty tragic realities.  Annie Mok and Emily Carroll’s “The Witch’s Work,” for example, explores the horrible aftermath endured by victims of sexual abuse, while Steve Beach’s “Daniel” takes a look at survivor’s guilt, moving on from past tragedies, and the courage required to be open about one’s sexuality despite the intolerance of others.

Those looking for straight-up horror yarns will find a few to chew on in this collection as well.  The Kelly Sue Deconnick penned “Legs” is the biggest highlight in that area, and is guaranteed to make the skin of any arachnophobic reader crawl.  And if you ever needed a reason not to go to Mars (other than the pants-crappingly horrifying certainty of dying in space), read “Mars To Stay” which features some very fine art by fan-favorite Cliff Chiang.

While there isn’t a weak tale in the bunch, there is one that doesn’t really match the tone of the collection.  Part 3 of the Dead Boy Detectives story “Run Ragged,” while certainly a fun end to its larger narrative, feels like an abrupt and jarring gap in the collection as a whole (just as Part 2 did in the Time Warp anthology earlier this year).

Buy It – Looking for a good start to the Halloween season?  Then look no further than this wickedly fun collection.  The Witching Hour boasts material that is fun, thought-provoking, and scary all rolled into one.