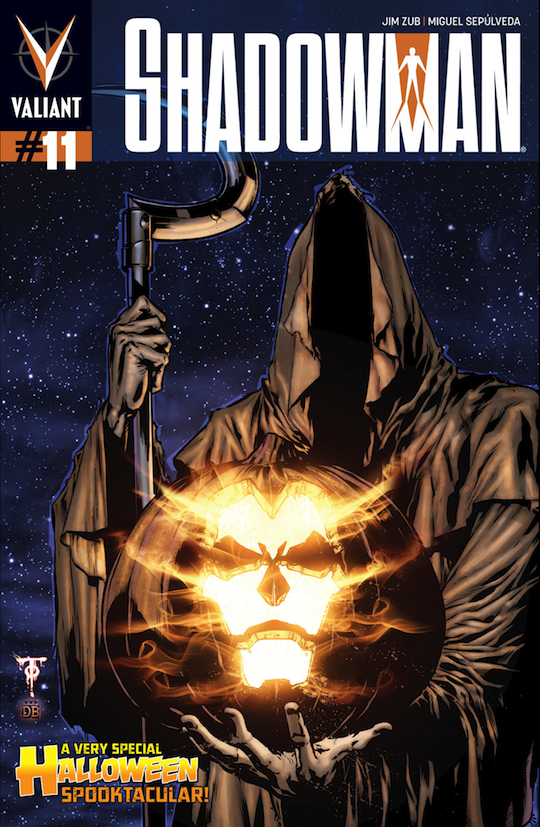 Shadowman #11 brings us Valiant’s first Halloween story, and I couldn’t imagine any other title that has a premise and themes that would work well in the holiday setting. One of the big selling points of this issue is that it is a standalone, one-and-done issue. In fact, the recap page is a mere three sentences briefly telling you who and what Shadowman is.

Unfortunately, this issue doesn’t represent the tone the series has built up to thus far. Justin Jordan built up a world filled with dark magic, voodoo beliefs, and other occult phenomenom. It has been creepy, chilling, and unrelenting in the violence department. This Halloween issue of Shadowman felt more like an old holiday special that the TV announcer would introduce as “Spoooooky!” But then again that is exactly what Valiant is advertising right on the cover: “A Very Special Halloween Spooktacular.” For that you are getting exactly what you paid for.

Despite having a different feel than the rest of the series, issue #11 is an enjoyable read. We are now between story arcs and creative teams, so it is only natural for things to change. Zub is guest writer for this issue and injects a little bit of fun and silliness into the world of Jack Boniface (Shadowman).

Boniface is still learning who he is and coming to terms with all of his new found power. We get a chance to see him try and work things out without the help of Dox and Alyssa. It’s a breath of fresh air that really allows us readers to just get to know our hero without the looming shadow of the end of the world. Hell, we also get to see Dr. Mirage kicking some ass as well.

Sepulveda does a good job with the art this issue, but it’s not as solid as what we’ve gotten in previous issues of Shadowman. It in no way distracts from Zub’s story, but the panel layouts feel a little bit repetitious at times. I wish there were a little more risk taken with the art.

It’s a one shot that captures the fun and spooky nature of the old Halloween TV specials many of us loved as kids. It stands on its own, so new readers can pick it up if they fancy. The only downside is that is not a full representation of what we have seen in the series so far, but it is an enjoyable intermission between creative teams.