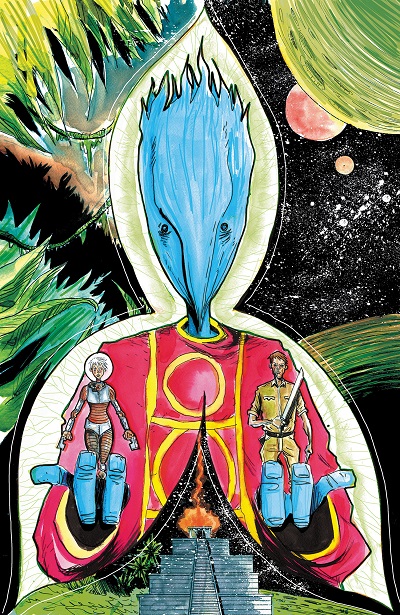 “Sorry, but I need your Raygun.”

If Trillium’s gripping story, beautiful visuals, and clever way of manipulating its reader’s reality hasn’t won you over yet, then this line and its accompanying image of a badass looking Nika holding a pulp-sci-fi style raygun surely will.  Jeff Lemire kicks the action up a notch in this installment, giving us some fun old-fashioned laser-zapping combat, while also taking a few moments to flesh out the back-stories of the two main characters.

In this issue, after learning more about Nika’s past through an introductory flashback, we find her stuck in quarantine following her return from her trip through the time vortex.  After a confrontation with Commander Pohl, Nika soon realizes that she’ll have to take matters into her own hands if she’s to solve the mystery of what happened in the temple.  Back in the past, William is in a similar situation as he attempts to convince his brother that the strange woman he just encountered is real.

It’s always fun to see an accomplished writer or artist push their skills to new levels, and that certainly is the case here with Jeff Lemire.  It’s getting crazy how much each issue of Trillium seems to show us another facet of his talent, be it in terms of the story’s intertwining narrative or its visual ambition.  This month’s issue has some great examples of Lemire’s growth in action.  The opening scene from Nika’s childhood shows a complexity that we haven’t seen in his artwork before, while managing to maintain that personal and emotional feeling that has become his trademark.

Lemire’s creative choices continue to impress as well.  The way he toys with your view as a reader through the book’s many flip-arounds still feels daring rather than gimmicky.  Not only does it screw with your psychical perception in just the right way, but it makes the reading of the book more involved.  It’s a story that you take part in, a comic that takes you by the hand and invites you along on its journey.

Buy It – This month’s issue of the “last love story ever told” injects some futuristic action into the sci-fi romance, while continuing to unravel the mystery of how William and Nika’s chance encounter will end the universe.  If you’re not reading Jeff Lemire’s Trillium yet, you’re missing out.