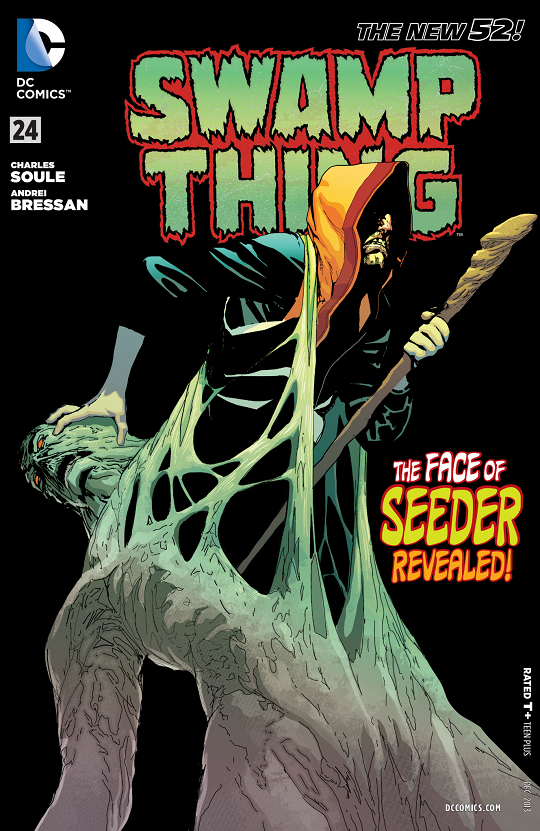 With villains month at an end, Soule brings us back to the story he was telling before the month long break, and ooh boy, it’s a great issue to welcome us back. The events of Soule’s previous issues of Swamp Thing have all been leading up to the confrontation between big ole Swampy and the ever mysterious Seeder.

Throughout his run Soule has been working to create a supporting cast for Alec Holland (aka Swamp Thing). We’ve been given glimpses of previous avatars of the green, seen the parliament a bit more, and been introduced to the youthful, but rather old Capucine. All of these threads that Soule has been weaving, like vines on a lattice, begin to entwine in this issue. He’s also pulled from some of Swamp Thing’s new 52 roots, and tied this issue in with last year’s annual.

Bressan is a guest artist for this month, but his style is similar to what we’ve seen over the past several issues, so I am guessing this will look alright when in trade format. The layouts contain some interesting Paquette-like panels, but overall the panel arrangement is a little boring. What is happening in those panels however, is not boring. We get some rather twisted art as the Seeder and Swamp Thing face off.

For the better part of the issue there is a lot of dialog between the characters, but it works are delving more into who these people are. Both the Seeder and Capucine are new characters introduced by Soule, so we can’t just hit a wiki and find out more. I find it exciting and refreshing to be able to experience something wholly original in the superhero genre; too often we see the same villains appearing over and over throughout a series. Soule is giving us just enough to wet our mouths, but not enough to slake our thirst completely.

The issue concludes with a rather unexpected twist and one I did not see coming. I really wish I could post a picture of the last panel, as Swamp Thing’s reaction is exactly the same that I had. This sh*t is going to get flipping nuts.

Buy it! Soule has been killing it on Swamp Thing, and I am now looking forward to this book even more now. It’s a shame that DC doesn’t double ship.