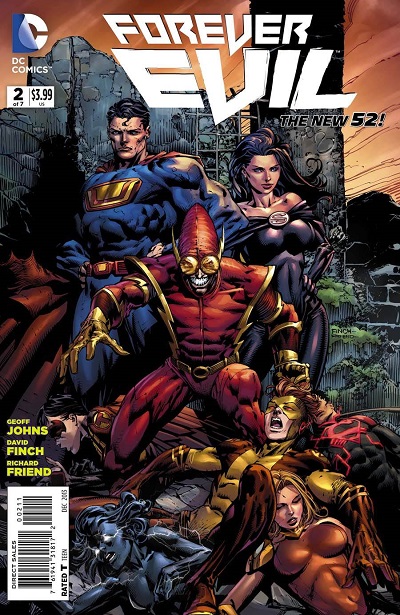 After the first chapter of Forever Evil slammed into the DCU with enough force to alter the direction of the entire publishing line for a month (as well as the planetology of its fictional inhabitants), it’s only natural for one to ponder how it could possibly escalate from there.  Luckily, it’s a question that Johns and Finch also seemed all too aware of; as the second installment of this bombastic crossover does not even attempt to one-up its explosive introduction, and instead smartly turns the focus of the storytelling onto the melodrama of the characters themselves.

With the Crime Syndicate firmly entrenched upon Prime Earth, their claims that the Justice League has fallen ring ever more true with each passing day.  With their champions gone, it now falls to some unlikely heroes (loosely defined) to stand against these tyrannical conquerors.  The Teen Titans enter the fray at the behest of Red Robin, Ultraman learns of a possible threat in Khandaq, the Rogues make their move, and even Lex Luthor turns his brilliant mind toward the goal of overthrowing this new roadblock to his designs.  But even as all of this opposition rises up against them, could the biggest threat to the Crime Syndicate actually come from within?

As I have stated before, the first chapter of this event came out of the gate with both guns blazing and fully content to tear down what had been built in the New 52 over the last two years.  And while its follow-up with Villain’s Month had an equal number of less-than-stellar entries as it did amazing ones, we do begin to see some payoff here from some of those disjointed issues as they are weaved into the larger narrative. It’s not enough to completely redefine those titles that are referenced here, but it does add a little more color to the overall tale, which is nice to see.

Setting that aside though, the real focus Johns brings in this chapter is onto the Crime Syndicate as people.  It’s a very smart play after the attention grabbing first chapter, and serves the story by allowing us to get to know who these enigmatic antagonists actually are as individuals and a team.  Even more importantly, instead of trying to one-up its predecessor in the field of destruction, the escalation comes in the form of character melodrama amongst the interplay of the Syndicate themselves; leading to interesting plot developments in this arena that rival the planetoid-sized reveals of the first.

Delivering the visual accompaniment to this tale of intrigue, Finch continues to bring his darker pencils to this series.  Its heavy shadow work is a good fit for a story that drives so close to the evil side of the moral line, but can be taken to excess on occasion.  While it seems to fit quite nicely when drawing the malevolence of the Crime Syndicate, or to a lesser degree the machinations of Lex Luthor, it does clash a little once the more brightly garbed heroes enter into the picture.  It’s clearly a tough line to walk when bringing so many disparate styles together onto the page while maintaining the tone that he is going for, but it still has a hit-or-miss x-factor with each scene he draws.  That being said, even his misses still look quite fetching, and when he hits it delivers a noteworthy image that can make all of the minor blemishes of other scenes seem inconsequential if it culminated into this.

Holding strong, Forever Evil #2 gets a buy from me.  Eschewing the easy escalation of the destructive plot and choosing the harder character drama, the second chapter uses its strengths to begin garnering some investment from the reader into the story as a whole.  With multiple plot advancements and a shotgun spread overview of how the DCU is reacting to these events, it delivers a multi-course meal that most readers will find interesting, fulfilling, and worth the price of entry.