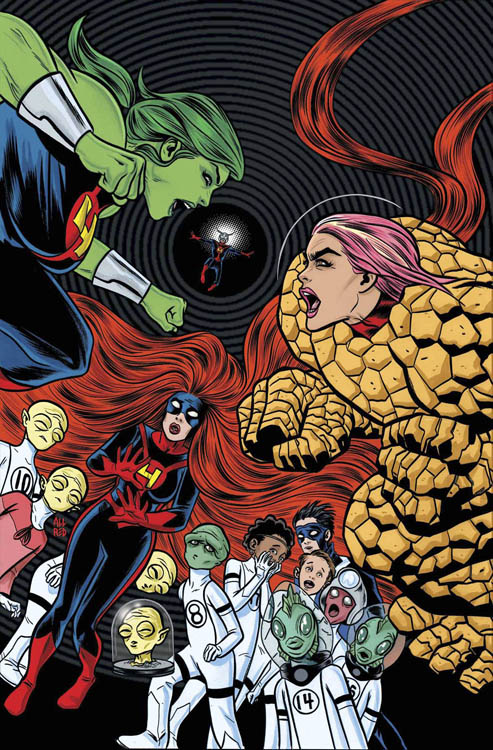 From the start FF has been full of charm, humor, and themes of friendship. This recent issue is no different and continues with everything that has been built upon so far. This is the first issue that Matt Fraction has been off of scripting duties, but Lee Allred does a more than superb job of picking up where Matt left off.

There are a several different stories and sub-stories going on throughout the issue. While most are fairly independent from the others, each is entertaining. With such a large cast of characters it is hard to give each some time in a 20 page issue, but the Allreds manage to get everyone in without that feeling that things are forced or shoehorned. It’s a balance that is often found in Emmy awarding winning TV shows that juggle a large cast of characters and multiple stories.

The dialog and art exude that classic silver age feel of Kirby and Lee, yet everything still feels modern and fresh. There is a page with Adolf Impossible and Luna watching TV that presents some very interesting anime inspired art as well as gives us a rather touching interaction between the two. There are several more single pages that are fantastic and even when removed from the issue work completely on their own. I might end up taking screen shots of this issue and setting some new wallpapers on my iPad. It’s pretty darn fantastic.

Pick this up. FF has been killing it for a while, and issue #12 stands out as another all enjoyable issue. It’s something you can read with your kids as well, so a plus for all you parents out there.