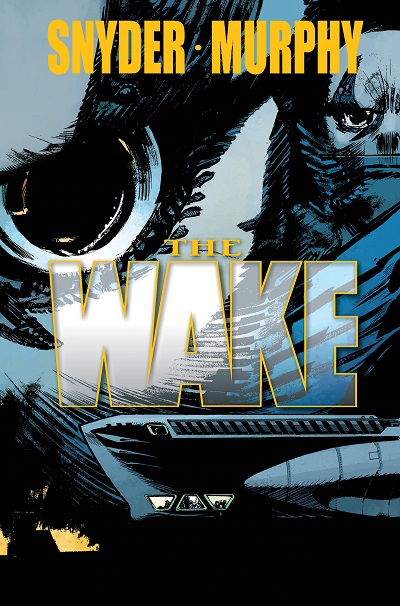 They just keep tightening the net on us, don’t they?  Just when you think things in The Wake couldn’t get more intense or claustrophobic, Scott Snyder and Sean Murphy manage to push it up a couple more notches.  Perhaps what’s more surprising, however, is that this is only the fourth installment in this ten issue mini-series, and it feels like we haven’t even started to scratch the surface of what this world has to offer.  This story is proving to be more and more ambitious with each new release.

In most creature-feature horror films there’s a portion of the story that could be called “the sprint,” in which the main surviving characters desperately – and usually fruitlessly – try to escape whatever beast is stalking them.  If The Wake was a movie, this issue would fall into that category.  As the Ghost Rig is besieged by the emerging hordes of vicious sea monsters, the remaining crew members attempt to figure out a way to make it back to the surface with their hides intact.  And as is expected, complications soon arise.

From a narrative stand-point, this issue for the most part is one big shot of adrenaline to the reader’s chest.  The first half of the book is survival-horror at its finest, plunging these characters that we’ve grown to care for into situations that leave us gasping for air as much as they are.  In the issue’s second half, writer Scott Snyder uses an uneasy break in the action as another opportunity to build up The Wake’s mythology, this time in the form of a creepy folk tale from the Netherlands.  Snyder’s gift for creating extensive fully-realized universes in his stories has been apparent since American Vampire, and it’s exciting to see how large this series’ scope is.

Meanwhile, Sean Murphy continues to be focused on making his readers poop their pants in fear.  His work on the monster mer-people has been fantastic to be sure, but the atmosphere of The Wake and that I-want-to-get-the-hell-out-of-here feeling that comes over you while reading it is even more impressive.

Buy it – Believe the hype about this series.  The Wake has been a bloody good ride so far, and issue #4 continues that streak.  If you’re looking for some ambitious storytelling with great creature horror, well written characters, and a setting that will make you shiver, look no further.