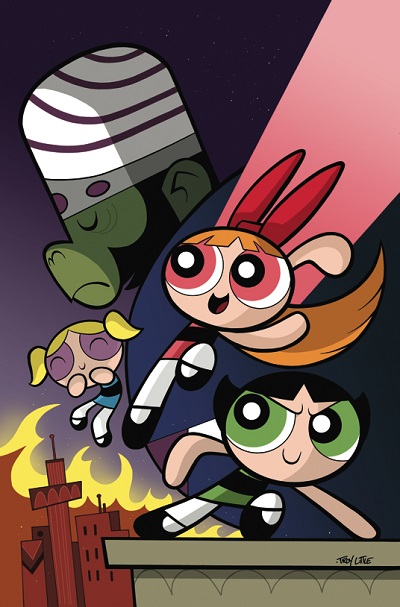 It’s no secret that comics geared towards younger audiences are becoming a rare commodity these days.  Even more uncommon are comics that actually live up to the “all-ages” title they fall under; those perfectly balanced books that entertain and can be read by kids and adults alike.  That’s not to say that there isn’t some hope on the horizon.  Books like Itty Bitty Hellboy and Li’l Gotham have been bridging that gap successfully, and this week sees a welcomed new entry into that resurgence with Powerpuff Girls #1 from IDW.

We open in the fair city of Townsville, which happens to be suffering from a raging case of Mojo Jojo in an exoskeleton.  After a call from the city’s mayor, the Powerpuff Girls speed to the scene to thwart the dastardly ape’s plans of destruction.  It’s all in a day’s work for our heroes, but they soon learn that the day isn’t over for them yet.

Writer/artist Troy Little captures the humor and tone of the original cartoon perfectly in this first outing, making it a great introduction to the universe for young fans who are just meeting the characters for the first time.  Veteran Powerpuff fans, meanwhile, will be pleased to find that Little has no problem maintaining the show’s charm, making it feel like a reunion with some old friends.  You know something’s been done right with a comic when it makes you laugh out loud while reading it and you wish there were more when it’s done.

Buy It.  If you’re looking for a comic that you can read with your kids while also sharing in on the laughs, Powerpuff Girls #1 is the book for you.  And all you long-time fans who’ve grown up watching their adventures will definitely get a kick out of it too.