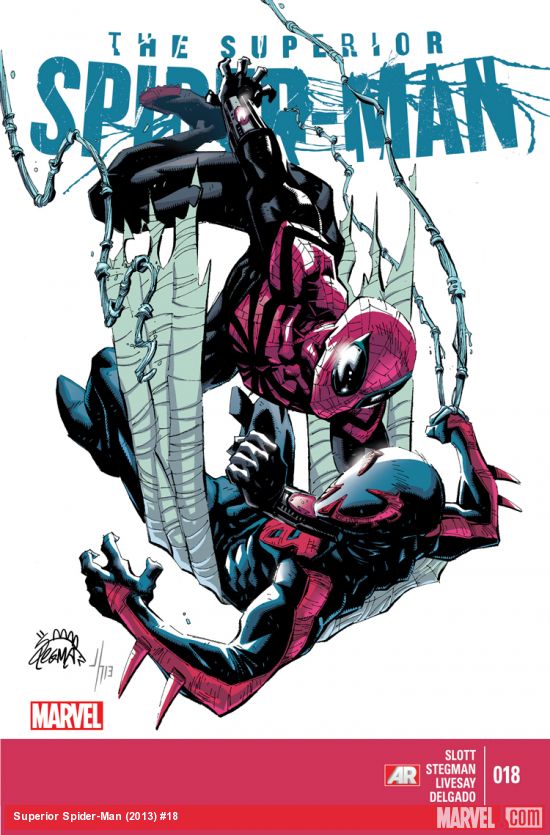 I’m going to start this off by saying that I am very biased when it comes to the 2099 universe. My teenage comic collecting days intersected with the introduction of the 2099 series of comics in Marvel, and I have been a huge fan–for better or worse. Spider-Man 2099 in particular has always given me a gleeful smile and a nostalgic pang. You can imagine, then, that the introduction of Miguel O’Hara into the Superior Spider-Man title was a big deal for me. And, I’m happy to say, this story arc does not disappoint.

This is issue two in the arc and Superior and 2099 Spider-Men square off for the first time. Ock\Spidey does not have access to the memory of meeting his blue counter-part from the future and sees him as something of a usurper. Miguel, on the other hand, does remember Spidey–Peter Parker in particular–and can’t seem to figure out what is going on. As he tries to unravel the mystery of this Superior Spider-Man, 2099 is also trying to save a man who has tremendous impact both on the future at large and Miguel’s personal future, Tiberius Stone. However, this doesn’t mean he’s entirely beholden to either this Stone or Tyler Stone of the future, and we get to a great moment where Spidey 2099 takes matters into his own hands to figure out the paradox of future vs. past.

I did have a couple of issues with the book, and I think they’ve been building for a while now. First is that there is a lot of information delivered through thought bubbles and interior monologue. It’s understandable since not everyone is going to have the background with the 2099 universe that I have, but it still gets clunky at times. Second, Superior Spider-Man’s dialog is getting out of hand. He sounds more and more like Otto Octavious, and a campy version of that character as well. He often refers to people as “buffoon” or “whelp” and at one point declares out loud to “…face my wrath!” There is even a moment where he takes great offense at being called “low-tech.” On the one hand, it serves as a constant reminder that this is not Peter Parker in the suit, but on the other it’s distracting and served to take me out of the story several times.

I can say that I don’t remember Spider-Man 2099 ever looking this good. Ryan Stegman has a firm grasp on the Spider-Man physicality, and to see both of them on the page at the same time is a joy. The action is dynamic, the poses are awesome without seeming contrived, and even the quieter moments are gorgeous to look at. The colors in the book, provided by Edgar Delgado, are something to behold also as it’s clear where each character is in time based on the yellow shade they take as they travel.

Buy it. Time travel in comics is both a given and a burden, but Dan Slott and company manage to make it fun while also making it reasonably plausible. Remember that this is a Marvel Universe that is splitting at the seams in terms of space-time, and this book takes wonderful advantage of it. And really, any chance to see Spidey 2099 again is good enough for me.