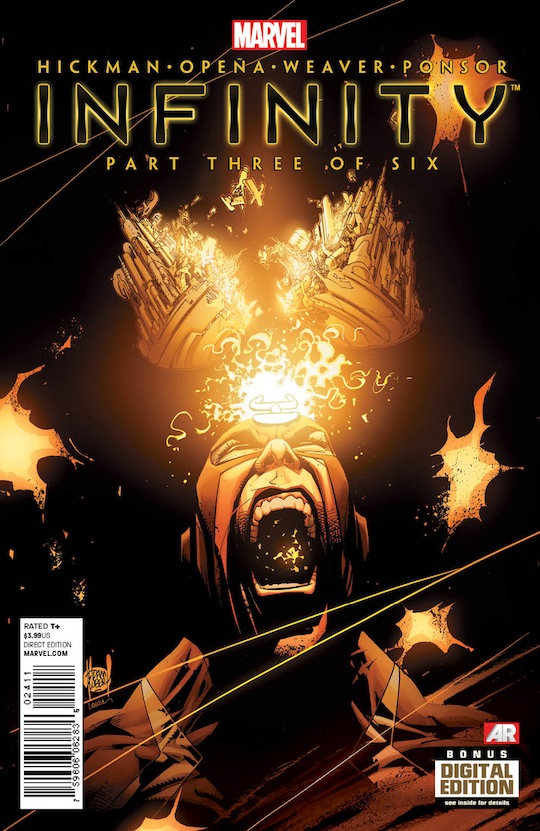 Infinity. Never ending without limits. This is a proper event that is not confined to the pages of only the main-event title. It spills over into several tie-ins, and there are even leaks of the event found in many more Marvel titles. For myself, it is the grand-scale of all of the events that has me enthralled. It’s all the details throughout the Marvel Universe that I want to seek out and devour. Infinity serves to act more as the spine of the event, and issue #3 reads a little like an extended recap. The key word there being “reads.”

For the most part, the events in this issue are all unfolding in front of our eyes, although I felt it read like a recap based on the first several pages. These pages contained mostly narration boxes summarizing the events that followed the end of Avengers #19. I am grateful these events were glossed over, as the details would have probably been boring to read. My squabble is that they caused my excitement of the issue to dip.

Hickman does pick things back up as Captain America reveals a plan to his Avengers and their allies. Watching the events unfold even further increased the action, and my excitement was returning to pre-issue-opening levels. The events with Black Bolt were by far my favorite part of the issue, and have piqued my interest in the character.

If we were to look deep and point at a fault in Infinity #3 it would be that it lacks some of the finer detail of both story and action that is found in the tie-ins. On some levels I can understand this, because there are several different fronts being fought in this tale.

The art however, it not lacking in detail. The team of Opeña, Weaver, and Ponsor provides some jaw dropping, straight up bad ass art. Opeña’s work on the first arc of Hickman’s Avengers is some of my favorite done in the past year, and it’s great to get more of his work at any oppotunity. This is a very pretty book.

When all is said and done though, I found myself scratching my head at the events that concluded this issues time with Captain America and the space Avengers. Why didn’t that just happened at the start of all this?!

Despite my nitpicks with the more generalized storytelling of the main-event title, I found Infinity #3 to be enjoyable. As a whole it provides insight into what is going on around the Marvel Universe. If you just want to keep up the larger picture of the event, you should be fine just reading this. Pick up the tie-ins if you want the nitty-gritty of all the goings-on.