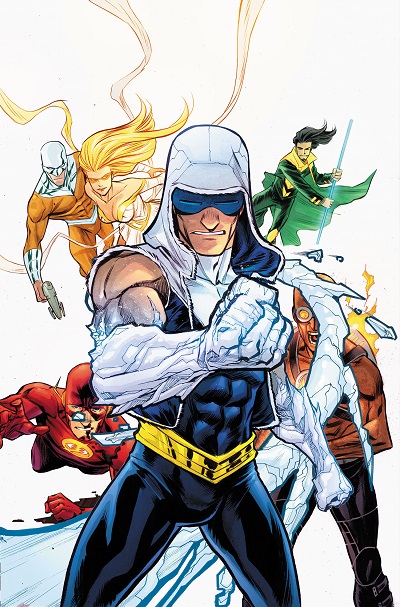 I’m going to come right out and say it, I absolutely love The Rogues.  Janky blue-collar super-villains with a code of ethics, who between them have enough personality and conflicting viewpoints to drive their own story in tandem with their run-ins with The Flash.  What’s not to love?!  So to say this was one of my most anticipated Villains Month entries is a bit of an understatement.  That being said, such a status comes with a lot of negatives as well when anticipation is built up to such a fevered pitch.  My expectations were high, and the bar was set at a fairly unprecedented level; which is something I purposefully try to limit doing in order to quell disappointment before it can begin.  So, with my admissions let into the light, lets take a look at Buccellato and Zircher’s The Flash 23.3: The Rogues to see if it can meet the challenge.

Less than stellar alone, The Rogues have built a credo to operate by.  A credo that mandates none of them will ever be left behind.  While living up to that golden rule with their efforts to free the Trickster, the world takes a sudden and drastic shift though; dragging our C-list villains into the middle of Forever Evil, a situation that falls well outside their pay-grade.  But even as fate delivers them a setting that finally puts them on top, the trials and tribulations of their time together have finally come to a head.  Can The Rogues follow their own rules when it could cost them everything they’ve just gained?  And does a world in which their peers are in charge line up with the loose ethics that the team was founded upon?

THIS is an example of what I was hoping for from Villains Month.  Buccellato delivers a story that not only explores the interactions of these particular villains when they are not being foiled by their hero; but also weaves the issue into the overarching Forever Evil crossover by showing how these unique individuals may react to a world ruled by their peers.  Each of these characters within the DCU are different, and all have varying motives behind their life of crime, so for myself it is always nice to see a creative team embrace that aspect of the grey in-between and apply it to the situation at hand.  There is a self-aware humor amongst The Rogues that also comes across in this issue, where they seem to know their place in the pecking order of the DC Villains, and choose their actions when plunked into the throng accordingly.  Overall, a fun issue of writing that goes a long way in cementing these characters as the quasi-villains they are in the DC Universe.

Where The Flash never disappoints since its relaunch has been in the arena of artwork.  But, with Villains Month bringing many new pencils to bear upon these somewhat established characters, I was happy to see an artist such as Zircher instead of a newer hand on an issue I was so excited for.  Keeping a similar line style to the run as a whole, it maintains the feel of The Flash title thus far while muddying the artwork just enough to anchor the perspective from the villains side of the table.  With a lot of the issue centering on the arguments amongst the team itself, Zircher also gets to showcase his emotive skills as well; running each of the characters through slapstick humor, concern, remorse, and anger.  It’s a very strong showing on his part, made only better by the somewhat darker palette choices that colorist Nick Filardi brought to the issue to also help contrast it against its heroic counterpart.

Buy!  I came clean about loving The Rogues in the interest of full disclosure.  Not because I wanted to tell you all that my review would be biased, but to let you know that I would be the first one grumbling if Buccellato and Zircher couldn’t deliver something up to my expectations.  Luckily, all of my worries were unwarranted, as the issue comes out swinging and is one of the strongest of the Villains Month titles to date.  Keeping a touch of its required lighter tones in comparison to its villainous compatriots this month, The Rogues delivers a fun ride that sets up a new status quo for the crew we love to…well, love, while amusing readers along the way.