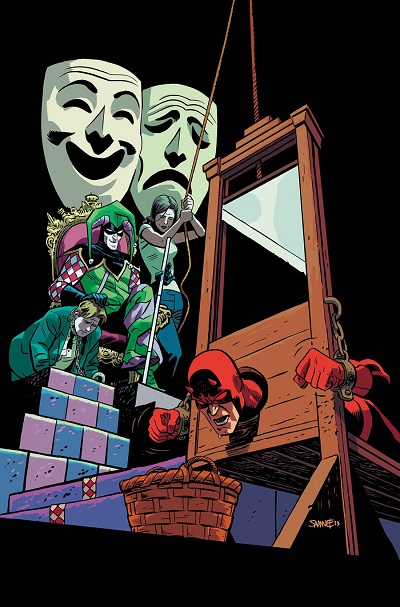 To describe this month’s issue of Daredevil as a rollercoaster ride would be entering a sure-winner into the “Understatement of the Week” contest.  Readers of this series know that it has the ability to make you cry, gasp, laugh, and cheer, but this issue is a great example of how the dynamite creative team of Mark Waid and Chris Samnee are somehow able to make all four happen in a single issue.

The story centers around a controversial trial similar to the Trayvon Martin case and sharing the same outcome.  With tensions high in New York as the trial’s verdict breaks, Jester is hired by the white supremacist group the Sons of the Serpent to incite a city-wide riot, and only Daredevil can stop the chaos.  Meanwhile we check in on Foggy, who has started a support group for other individuals who are fighting cancer.

Sometimes it boggles the mind what a master storyteller can do in the span of a mere 22 pages, and that certainly is the case with Mark Waid’s work in this issue.  By the end of Daredevil #31, it feels like you’ve just read a double-sized annual, there’s so much to digest.  Perhaps most impressive, however, is that none of its scenes feel forced or shoe-horned in.  The serious themes in this issue are explored with great care and never feel disrespectful, while the lighter moments infuse the story with some genuine fun.  It absolutely boggles the mind how Waid is able to consistently write this well, month in and month out.

Speaking of ridiculously consistent work, Chris Samnee’s art is wonderful.  The opening scene involving Foggy is beautifully done, once again showing the artist’s uncanny ability to honestly capture the quiet moments of a story that cut to the core of the audience.  It’s incredible how much emotion he is able to express without making things overly detailed.  And if you never thought there was a chance that you’d find a giant ant cute, think again.  Samnee miraculously manages to pull that off too.

Pick this one up.  Daredevil #31 runs the gauntlet of emotions we have come to expect in this series, while offering shocking and thought-provoking moments that will make you thumb through the issue a few more times after reading it just to make sure they actually happened.