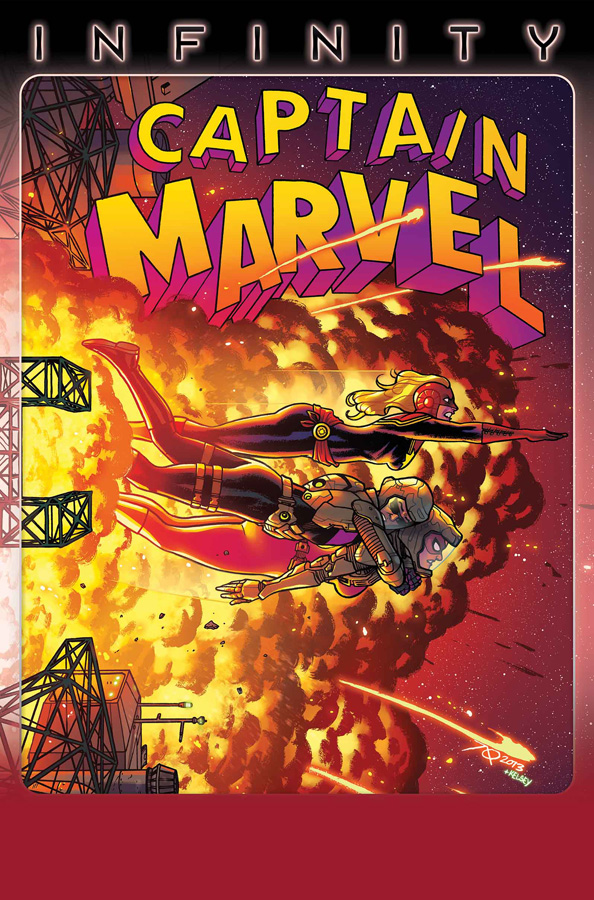 The 1980s wasn’t a particularly good decade for Carol Danvers. Without dredging up old controversies, the Captain Marvel team pays homage to her time as Binary in part two of an Infinity tie-in. What is Binary? DeConnick and Van Meter answer that question for those readers who weren’t alive back in 1982 (like myself) or haven’t chased down those back issues.

The Builders close in on Captain Marvel as she tries to protect her teammates from being sucked into a black hole. Carol’s binary powers are triggered by the black hole, as shown in last issue’s spoiler-y cover. Her power levels basically expand to manipulate space and gravity. Who wouldn’t want powers that match a binary star system?

Of course, binary powers alone are not enough to ensure their safety. The Builders hold Captain Marvel’s team hostage in their command vessel. Meanwhile, Captain Marvel and Hawkeye debate what kinds of sacrifices heroes should make for the greater good. This is fitting since Captain Marvel gave up a part of herself (literally) and her memories in a recent battle against Yon-Rogg.

It can be frustrating when a book loses its voice because of endless tie-ins. Thankfully, DeConnick and Van Meter do not pause Captain Marvel’s momentum to advance the greater Infinity storyline. Carol is still dealing with losing her memory and the tone of the issue reflects that. There’s considerable friction between Carol Danvers and Jessica Drew based on The Enemy Within. For a story arc to have power, there needs to be real consequences and this issue delivers. I hope the writing team continues to explore the aftermath in upcoming issues. My only gripe is that I miss the supporting cast of Captain Marvel. I miss Wendy Kawasaki and Tracy Burke and all of the smart dialogue that make this book a fan favorite.

In terms of artwork, the layouts enhance Carol’s binary powers and show a great sense of movement. There is room for improvement on Olliffe’s facial work and posing as some of the characters feel stiff.

The Verdict: Buy It! If you like cosmic adventure stories, this has everything you would want. If you haven’t been reading this book, I would recommend you rectify that immediately. You can start with the previous issue or go back to The Enemy Within for greater context on Carol’s memory loss.