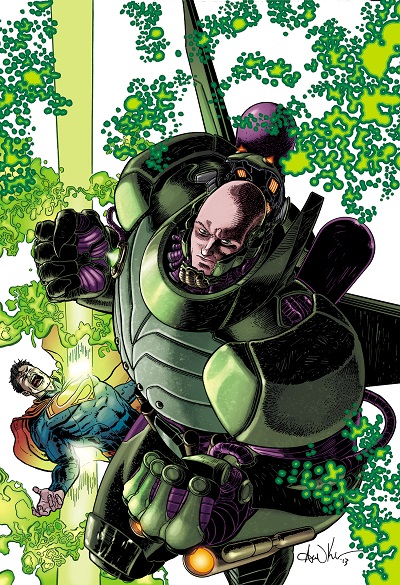 Gene Hackman, Kevin Spacey, and Clancy Brown are just a few of the individuals in recent years who have been able to play the role, but regardless of the window-dressing, it is hard to think of a more iconic villain for the big guy in blue than Lex Luthor.  The perfect foil to the ultimate good samaritan, he is the hyper-realization of our greatest strength and weakness as a species; our unyielding desire to be the best.  This time around, starring in his own Villain’s Month issue, Charles Soule and Raymund Bermudez get to take their crack at the bald dynamo, exploring his fractured yet brilliant mindscape while lining up the character with his recent depiction in Forever Evil #1 in contrast to his appearances thus far.

Fresh out of jail (legally), Lex Luthor sets out to reclaim his rightful position on top of the business world.  But during his brief incarceration things have changed.  Rivals openly challenge him in the marketplace, his staff is newly minted and must be tested, and his R&D department has been slacking.  Even with these challenges in the forefront, there is still one major item that dwarfs all others; why has Superman not challenged him from the moment of his release?  What happened to his rival?  And what could possibly ruin the best day in months for Lex Luthor?

Even with the pen of Charles Soule behind this issue (whose recent work on Swamp Thing and Red Lanterns have shown considerable talent), I really was not expecting much out of this issue.  I assumed it would be a chess move to line the character up with where they wanted him to be moving forward, and to be honest it is really what the issue ended up being.  Where it bucked expectations though was in the manner that Soule was able to write the character.  Utilizing inner monologues to explore the character without the interactions of Superman that we usually see him through, Soule is able to mix in equal parts of arrogance, brilliance, and drive; coming together to create the complicated character that we know Lex to be.  It’s one of the better depictions of the villain to date in the New 52, and sets a nice baseline for Lex himself moving forward, while also lining up his circumstances as the issue needed to do.

Bermudez’s artwork does show some room for improvement.  Tasked with making an essentially action-free issue visually appealing, it seemed as though the anatomy (and most notably facial structure) of a few panels were sacrificed in an attempt to jazz up the staging of those scenes.  It is somewhat jarring on occasion, but it is serviceable for the story being told.  There is one scene in particular that struggles slightly with the story-telling aspects of the art (taking a read or two to figure out what actually happened), which does mire down the one real action sequence in the title, but does not detract from the story as a whole.

Have you been missing quasi-evil mastermind Lex Luthor since the New 52 launched?  Well pine no more.  Charles Soule shows that he understands the driving factors of this iconic villain, and if you can overlook some artistic choices, you too can take a look under the hood and see what makes this villainous genius tick.