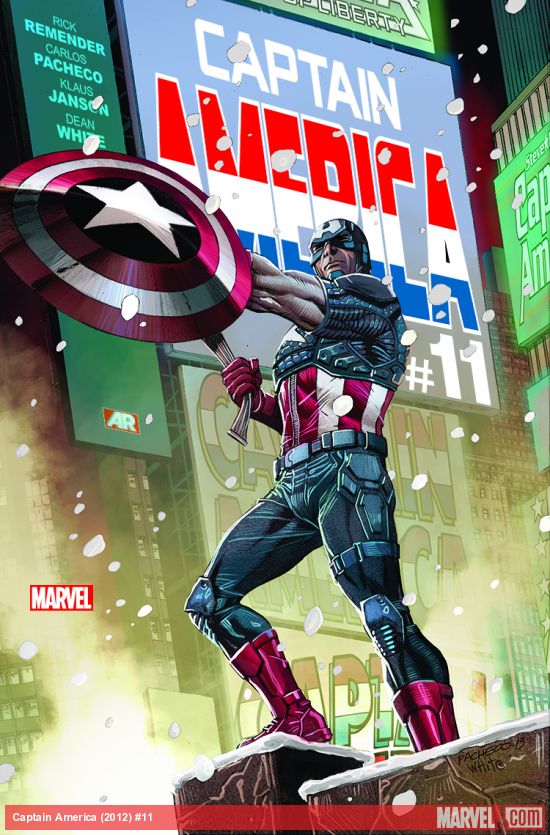 The first few pages of Captain America #11 show Hank Pym and Bruce Banner working on Steve Rogers, repairing his injuries and erasing the bio-circuitry installed while the Captain was in Dimension Z. Similarly, the purpose of this issue seems to be to start erasing the Dimension Z storyline from our memories. While that arc wasn’t terrible, I believe it served to alienate some of the fans and it seems like Marvel would like to get the readership back up.

We’re back in the real world now. Cap’s home in the good old US-of-A and all of that sci-fi stuff is out of his body. Director Hill is on the scene to give us some exposition, Steve gets a shave and a haircut, and we get a cameo from a couple of our favorite science guys. There is even another flashback with Steve’s mom in her final days. The only hold over from the Dimension Z story is Jet, Zola’s daughter, who came through into this dimension on Cap’s heels. After a brief interrogation from Nick Fury Jr., Captain America turns up to take her home with him in his flying car–a nice thing to do since she doesn’t have her own place in this dimension. One interesting tidbit that we see here is a glimpse of Jet’s powerset, and it is nothing to scoff at. If and when she turns against SHIELD and the Captain, she’s not going to be an easy take-down.

It’s a decent issue to get us reacquainted with the real world of Captain America, though I did have one pretty big problem: the dialog is not what I expect from an A-list writer like Remender. The sequence with Mrs. Rogers is especially bad as she extolls self-help style passages about grief and loss that just don’t ring true. Characters have somewhat distinctive voices, but in a cliche sort of way, especially Fury Jr., who just drips of Sam Jackson.

However, there are some definite positives. First, the art is quite good. Carlos Pacheco manages to bridge the gap between John Romita Jr. and whomever is to come, keeping the angular look in the faces while adding a bit of polish and some needed detail. The story also ends quite well as we see the Captain’s bachelor pad and the rather drastic measures he takes to move on from his past. But the best thing in this book is the Captain himself. While the story seems to be all too happy to wash away the grime of Dimension Z, the twelve year ordeal has clearly taken a toll on the spangled Avenger. He’s quiet, sullen, and clings to Jet in a way that can only mean trouble in the future, and yet she is the only one who really knows what he’s gone through.

Wait and see. If you’ve been waiting for Dimension Z to wrap up to give Cap another shot, this is your chance. There is enough information in this issue to get you caught up and enough story to push you forward. Be warned, however, that not everything has fallen back into its proper place.