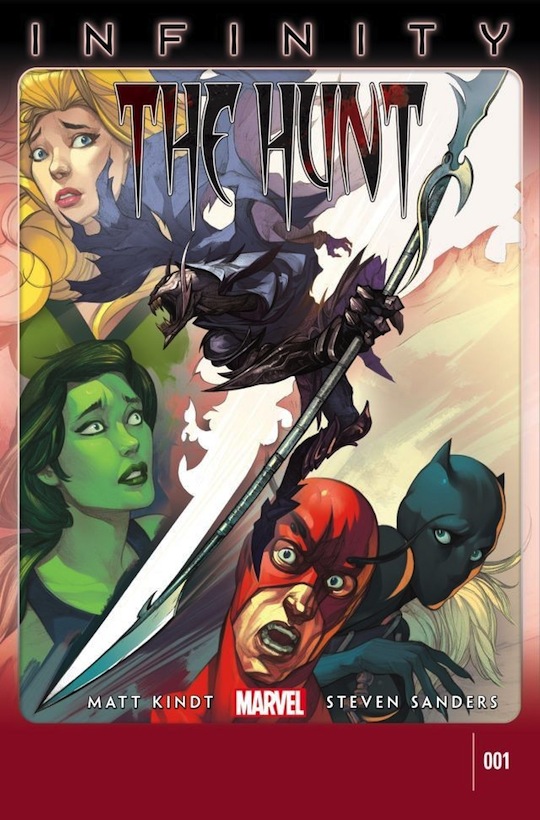 I must say that I am usually a fan of Matt Kindt’s work, but Infinity: The Hunt falls very short of the bar. If a great story is being told, I can often overlook art that doesn’t appeal to me, but in this case I found both the art and story to be lackluster. I hate to be completely negative, but this is one of the first issues in a long time that I was thoroughly disappointed I just dropped four bucks for a flipping comic book.

Let’s start with the story. Infinity: The Hunt is only a four issue mini-series, so one would hope things would get rolling in this issue. If you’ve been reading New Avengers  or Infinity then the big “reveal” at the end doesn’t really feel like a reveal. It felt anticlimactic after nearly an entire issue of reality TV-esque introductions of various B and C list youth heroes to compete in a Goblet of Fire inspired showdown of schools. Don’t get me wrong, I love FF, and it was nice to get some cameos here, but do we really need another book pitting the youthful heroes of tomorrow against each other? The hero fighting hero tripe is getting a bit stale.

The art for the issue also threw me for a loop. It looks as though Sanders is mimicking the style found in FF, but ultimately I feel the execution falls short. There is a slight wonkiness to it; it’s what I imagine it would look like if Mike Allred were to down a bottle of cough syrup before illustrating.

A big pass. This is not Kindt’s best work. It feels like a way to shoe-horn in some lesser known faces into the Infinity event, so maybe I should point some fingers at editorial. Besides the competition between the school (which now looks to be cancelled), I am unsure what the point of this series is.