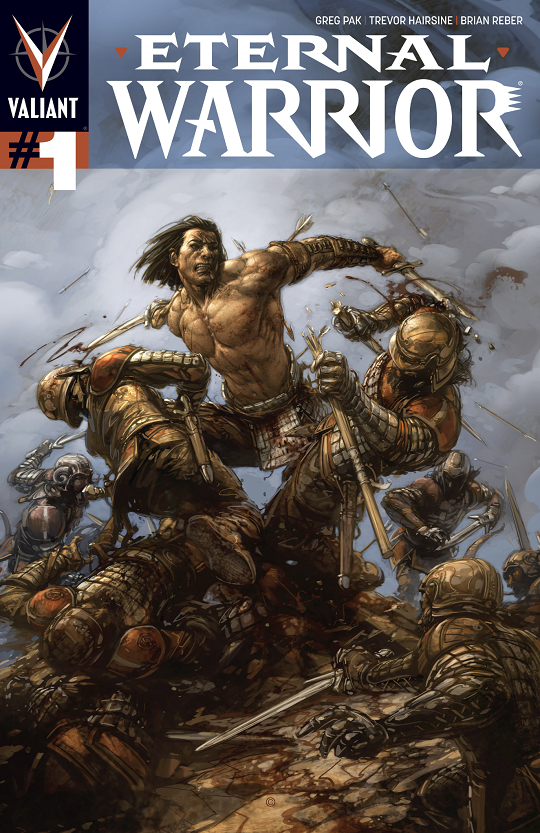 One problem that can often be found with number one issues is through the excessive or lack of exposition the writer spends either too much or too little time introducing the characters and setting up the series. It’s a balancing act of sorts. Enough needs to be given to entice readers, but not so much that would overwhelm or scare away new readers. In his Valiant debut, Greg Pak provides an intriguing and accessible first issue into the world of Valiant and Eternal Warrior.

For those us that have been reading either X-O Manowar or Archer and Armstrong we are greeted with the familiar war-loving protector of the Earth we have seen before. Pak shakes things up a bit by introducing the Eternal Warrior’s children into the story. The guy has been around over six millennia, so it wouldn’t be all that surprising to find out he might’ve fathered a child or two along the way. From what I have gathered about the character from his other appearances, I wouldn’t have expected to see any children of his popping up as supporting cast.

We also get a glimpse of a modern, possibly present day, Gilad (The Eternal Warrior) that has given up on protecting the Earth. This is a huge contrast to what has been established with the character before. But hey, this is a new series, and Pak gets to set the stage and rearrange the pieces as he sees fit. This really helped to set it apart from the other titles already associated with the character of the Eternal Warrior

Trevor Hairsine’s art has a very raw and rough feel to it. It complements the grittier tone of the book, and does the job of pulling you further into the panels and the battles to be found there. I was a big fan of his work on X-O Manowar and am looking forward to seeing Hairsine’s future issues of Eternal Warrior.

With the combination of the art, the balanced introduction, and new approach to Gilad Anni-Padda we are given a pretty solid and very good first issue. Listen, I’m a pretty hard-core Valiant fan boy, but I can’t say this was an amazing issue. It was lacking just that little extra dash of panache. It was a delicious appetizer, but I want the medium-rare steak entre now.

This wasn’t Valiant’s best debut, but that doesn’t diminish that this was a good start to Eternal Warrior. Both current and new Valiant readers should be able to enjoy the issue without any previous knowledge of the character. In fact, I think knowing less about the character would’ve piqued my interest in the series and this issue just a little more. New readers, give it a shot.