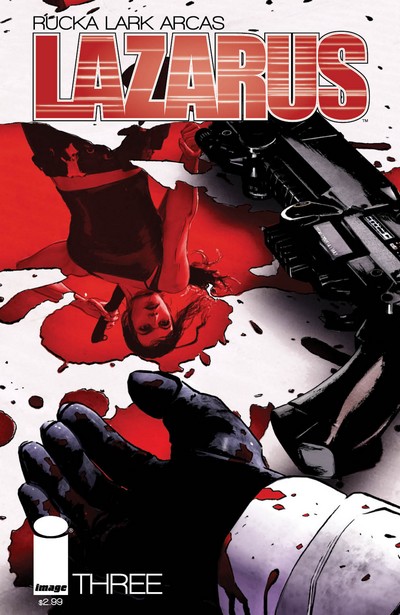 Forever arrives at the Morray family compound, as directed by her father, and is met with tense aggression by their forces. The only exception is the Morray Lazarus, a man named Joacquim. It’s quickly obvious that these two have a special relationship and are more familiar with each other than their role as family protectors requires. Can genetically modified fighting machines feel love? Apparently yes, they can.

Issue #3 also reminds us that the Carlyle twins, Jonah and Johanna, are well aware of their low level standing in the eyes of their father. They also understand that he’s up to something with Forever that is being intentionally kept from them, and it could even mean that their lives are at risk. Johanna is cold and clever, she isn’t afraid to use her own tricks  in order to protect herself and Jonah. She also doesn’t hesitate to sacrifice the family Lazarus for her own gains.

This issue focuses heavily on Forever and Joacquim, the struggles they’ve faced in their positions and what it really means to be a family Lazarus. It’s touching and sad. While Forever accomplishes her mission at a meeting with the head of the Morray family, Joacquim seems loathe to say goodbye to her. There is a nice balance here of keeping these particular characters strong and deadly but also exposing the cracks that are their real, human emotions.

Verdict: You should most definitely be reading this. Lazarus is an action packed story with heart, the characters are all believably harsh but also vulnerable and the basis of this new world on economic imbalance and military power is scarily realistic. Very cool series.