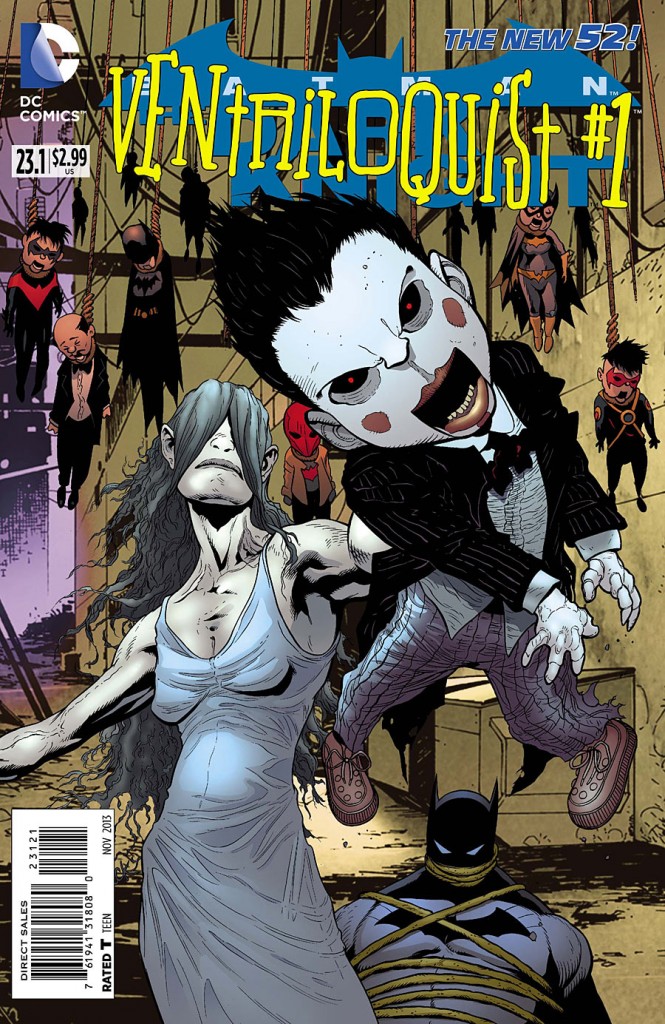 Some things in life are better in small doses. Unfortunately, Ventriloquist #1 inundates the reader with crude humor and bizarre comments from a dummy named Ferdie. It quickly progresses from darkly funny to somewhat tired after the first few pages.

Readers will recognize this version of the Ventriloquist and her dummy from the pages of Batgirl. Actually, naming this issue Batman: The Dark Knight #23.1 is a misnomer. The story itself ties directly into Batgirl and employs a sort of thematic symmetry between the lives of Barbara Gordon and Shauna Belzer. Let’s just say both ladies have family issues.

The Ventriloquist lures some vulnerable citizens of Crime Alley to a performance in an abandoned theater. Gotham City is being torn apart in the wake of Trinity War and the theater appears as a safe haven from the storm. The issue jumps between her performance and scenes from Shauna’s childhood relatively seamlessly. There are a few new wrinkles to her origin story, but it feels essentially like an extended version of her first appearance in Batgirl. There is no sense of excitement or urgency to the plot.

The New 52 Ventriloquist is a significant improvement from the campy, Arnold Wesker version of the character. Shauna Belzer has some dark and twisted elements to her psyche with stories that harken back to classic horror films. Gail Simone also writes a subtle commentary on eating disorders, gender and sexuality, and fame. Yet the character is done a disservice by a relatively predictable plot in this issue.

Pass. It adds something if you are a dedicated Batgirl reader, otherwise I would move on to better Villain’s Month offerings.