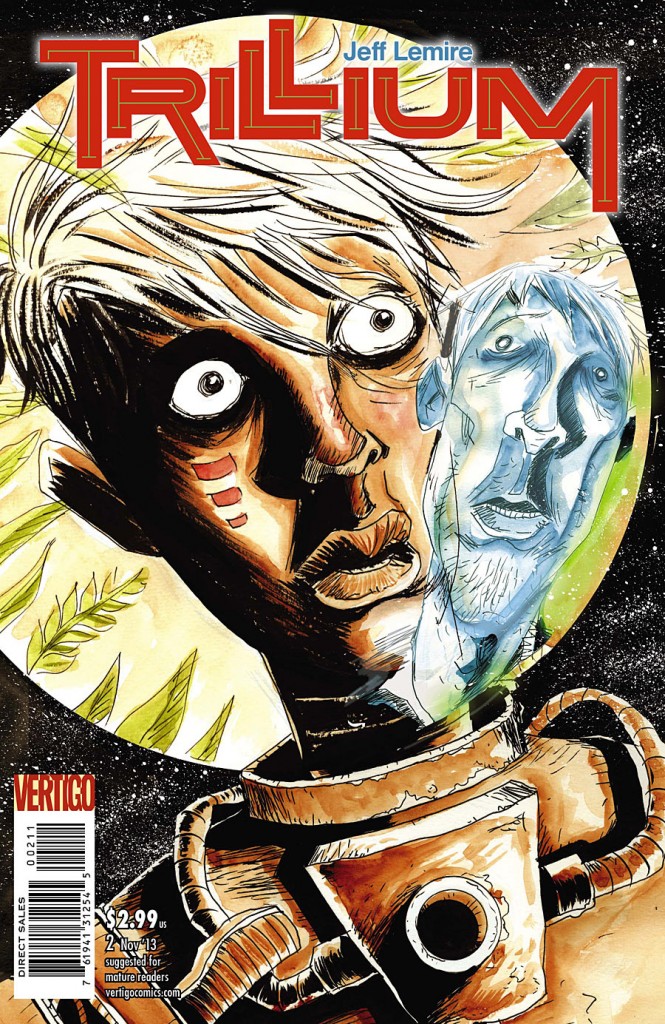 Have you ever tried to communicate with someone who doesn’t share your language? It’s forces you to rely on cues like body language, gestures and acting things out. Like a game of charades, it can make for some awkward and funny moments. In Trillium #2, the story picks up where it left off last issue with William and Nika meeting for the first time. Their languages and cultures are worlds apart (literally). They spend most of the issue struggling to communicate, misunderstanding each other in different ways. Nika uses technology that doesn’t exist yet in the 1920s and startles William at times. In turn, Nika seems incredulous about William living on Earth, a planet that no longer exists in 3797.

I would argue that Jeff Lemire brings something special to his creator-owned work in particular. So far, Trillium is filled with small moments between the main characters that really shine. Lemire is carefully building an initial friendship between William and Nika that doesn’t feel formulaic. It’s easy to appreciate how he avoids romantic tropes and traditional gender roles. Nika can be the bolder, more aggressive one at times. There’s also a larger plot beyond the romance, with an intergalactic threat known as The Caul.

Lemire’s illustrations can be an acquired taste for some readers. In this book, he has shown more attention to detail with backgrounds and depth to his work. There is a stunning two-page spread that perfectly showcases Nika and William and their first meeting.

Definitely buy. Trillium is a great addition to the lineup at Vertigo and an engaging read. With only two issues, this would be a great jumping-on point for the series.