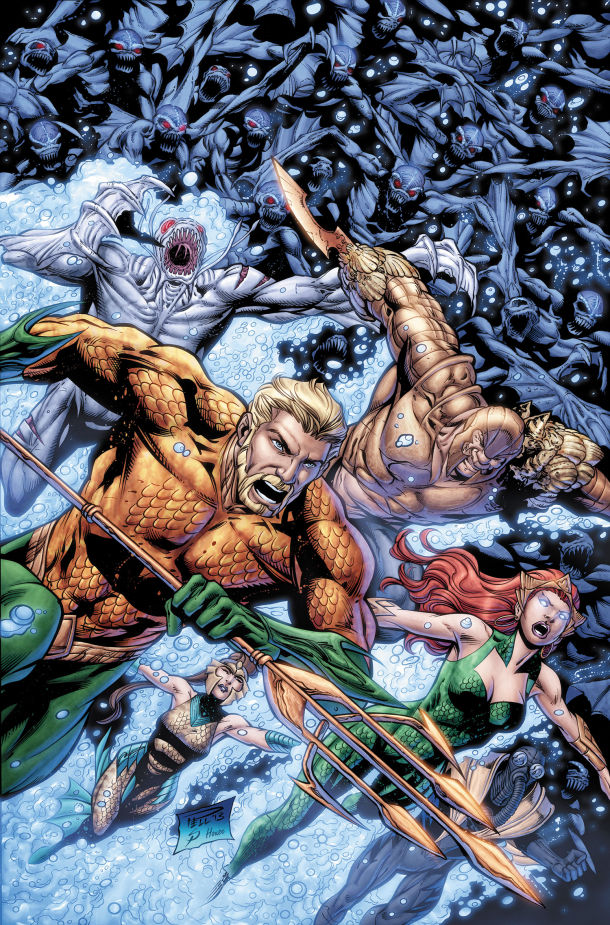 Today the news broke that Geoff Johns, Chief Creative Officer for DC Comics and author of Justice League will be leaving Aquaman (the other title he’s written since the New 52 started that he was still working on) with issue #25.

Geoff sat down with IGN and had this to say about his reasons for leaving:

“Aquaman is one of the greatest characters at DC Comics and one of my favorites. Ultimately, there are some reveals coming up in the “Death of a King” arc through issue #25 that sets the stage for his world and some of those threats are going to carry over to Justice League in a pretty big story next year. But between making Forever Evil and Justice League the best they can be and Gary [Frank] and I doing Batman: Earth One, issue #25 felt like the right time to bid farewell to him for now.”

On if he had hoped to accomplish everything he set out to do with Aquaman:

“I think we put him back on the map. The thing I’m really proud of is the fact that Ivan and Joe [Prado] were there for most of it with Blackest Night, Brightest Day, and the Aquaman launch. I feel like not only did we put Aquaman back on the map, but we put Mera on the map, period. I don’t think she’s ever been a character people had really considered before, and I think having those two characters out there as strong as they are together with the mythology that’s there, I think Aquaman feels – and deservedly so – like an A-list, premier DC hero. I hope that carries on; it certainly will carry over to Justice League.”

With his departure from Aquaman, on top of his decision to leave Green Lantern after issue #19 earlier this year, that leaves only Justice League as his main title he’s currently writing. But Johns is staying busy with the current miniseries event “Forever Evil” and he’s got a lot planned for that in the future:

“…the only thing I’m focused on right now is Justice League and Forever Evil. Right now, it’s 100% villains, 100% of the time. People who love Black Manta, he’s a main character in Forever Evil and there are a lot of plans for him in that. There are plans for Ocean Master. There are plans for lots of characters in Justice League as well, and I’ll still be working with Aquaman and Mera in the months ahead.”

Since the announcement, Jeff Parker (Batman 66) has been announced as the new author with Paul Pelletier and Sean Parsons on art duty.

What are your thoughts on Geoff Johns leaving Aquaman? Were you reading the series? What do you think o Jeff Parker taking over? Leave your thoughts in the comments below.