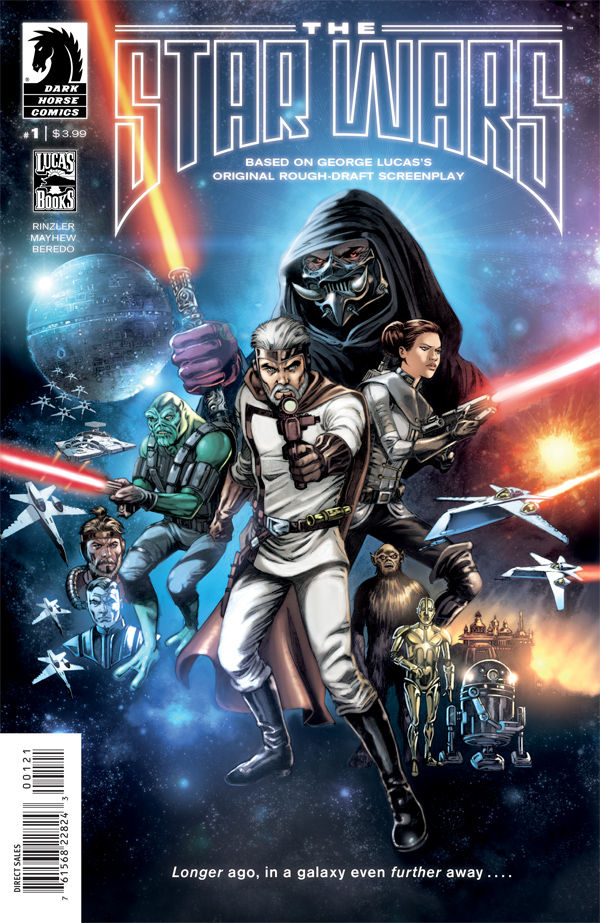 “Longer ago, in a galaxy even further away….”

This tag line adorns the bottom of the cover of The Star Wars, the new series from Dark Horse set in the universe we all know and love. Except this isn’t exactly that universe. This new series was developed from George Lucas’s rough draft screenplay from 1974, three years before the film Star Wars would capture the hearts and minds of science fiction and film lovers the world over.

The circumstances of this story are quite different from those in the 1977 film. Luke Skywalker is an old man, a general, and one of the Jedi-Bendu. The Jedi are almost extinct after a rebellion that is only vaguely referred to in the book’s dialog. The new emperor calls publicly for their heads, and the Empire prepares for war to bring Aquile, the last of the free systems, into lock-step.

The elements are all here, but many are split or unfamiliarly placed. Darth Vader makes a brief appearance and is sufficiently menacing, but he is human, sporting a Nazi-esque bowl cut and red eyes. The cyborg father figure is actually Kane Starkiller, father of Anakin, who is to become padawan to General Skywalker. Princess Leia, the only non-cursory female character, is very young and off to college and only appears on one page.

There are good and bad with this adaptation. The art is quite good. New designs of old favorite locations and ships–like the Stardestroyers and Aquile’s Palace of Light–are strikingly different while also familiar. Character designs have been tweaked to suggest what would become Darth Vader’s all black uniform and the white-and-black armor of the storm troopers while still painting them in a new light. Mike Mayhew has done a great job of grounding us in a familiar style while still keeping it fresh, and the colors of Rain Beredo are wonderful and expressive.

The story has some issues, however. First and foremost, the dialog is stiff, overly expository, and sometimes eye-rolling in its cheese factor. I don’t know if the dialog was lifted directly from Lucas’s screenplay or whether this is the work of J. W. Rinzler, but it can be difficult to get through. The plot features the politics of the Star Wars universe that we have come to know so well, but whether that’s a good thing or not is still in question. Several pages are spent here showing debates over alliances and trade routes, and many such scenes drag on too long.

Wait and See. Hardcore Star Wars fans will find a lot to love here, but those less fanatical may be left behind. Getting to see the origin of so many beloved characters is something of a treat, but stilted dialog and slow plot might be too much for the casual reader. There is genuine emotion and drama here, but the book is missing an overall sense of fun that would have served it well.