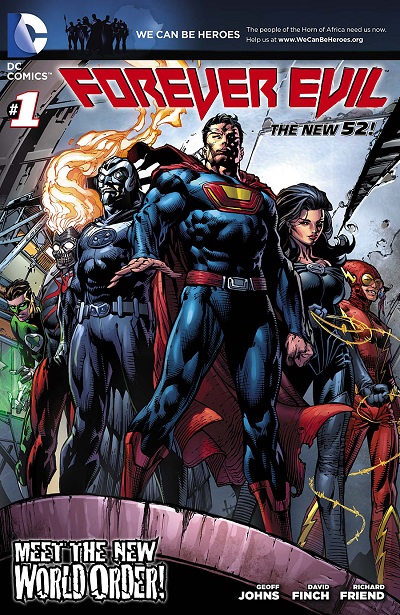 With Trinity War’s fairly successful combination of intrigue and integration setting the stage for a unified DC universe after two years of walled gardens, Johns now looks to deliver a followup haymaker that just may tear it apart in this week’s Forever Evil #1.  With the end goal of bringing the heroes and the world more closer together finally realized (even if it was with less than happy results), we now look to the opposite side of the fence; and to be frank, these villains know how to do it with showmanship.  So lets stop dilly-dallying and take a look at what Geoff Johns and David Finch are bringing to us in this week’s #1 issue of the mini-event-series.

With Trinity War culminating in the opening of a portal to another dimension, a new team of super-powered individuals have taken to the stage with a thunderous and much more villainous roar; the Crime Syndicate.  Quickly taking control of the situation and the planet, this Nega-Justice League now looks to cement their position by drafting the antagonists of the DCU into their fold.  But will all of these well-known self-centered villains play along with the new world order?  What happened to all of the heroes that were there at the opening of the portal?  And which DC hero of decades will find their secret identity exposed?

As a central lynchpin to the ‘Villains Month’ initiative, this mini-series goes a LOOOONG way in elevating it above the 50+ issues of secret origins that I was apprehensive the event was going to be.  Johns and Finch instead push a narrative that both creates large ramifications across the entire publishing line, as well as seeds plot beats that the writers of these various books can use for some time to come.  It’s bold, it’s audacious, and it’s bigger than the much publicized Trinity War crossover that preceded it.  Just like that previous storyline though, the cast is massive in nature, pulling in the villains from practically the entire line into one team setting that is rife with conflict and differences of opinion.  Each is written with a clear voice, and while some may not match up to their previous introductions entirely, most cases are for the better.

Finch’s artwork walks hand-in-hand with the summer blockbuster stylings of the story by delivering larger than life set pieces that stand out even as each page jumps from one team to another.  Tasked with the large undertaking of penciling so many characters at once, Finch shows he is up to the challenge by meticulously detailing even the smallest of villains in the background across each of the sweeping scenes.  It shows a level of respect to each of the antagonists, even if they do not find themselves with more than a single line throughout this initial chapter, and it is clear he had a lot of fun thinking about little things such as who these characters would stand next to in a group setting.  Again, like the writing, everything about it screams big; and it lends an aire of importance to the entire issue even though its outcome is ultimately temporary.

We’re trying to drive you to the poorhouse.  A resounding BUY.  Big in its ideas, big in its execution, and big in its ‘importance’; Forever Evil looks to knock the DCU on its rump just as it got to its legs.  But it is oh-so-fun to watch…