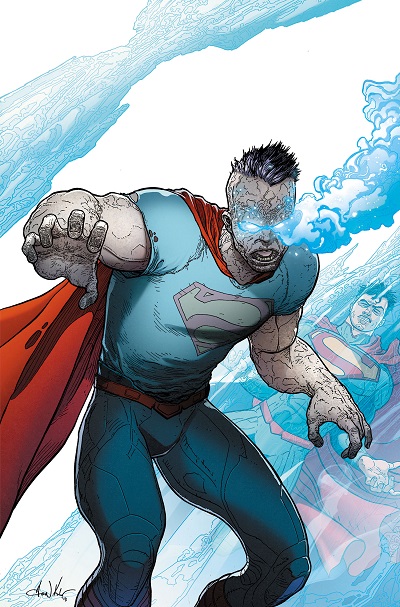 And so it begins.  You can usually count on two things during DC’s title-spanning September events: there are going to be some fantastic hits and some dismal misses.  “Villain’s Month” (this year’s incarnation) feels less jarring and momentum-skidding than last year’s “0 Issues,” but as Bizarro #1 indicates, that doesn’t mean it won’t have its fair share of lackluster installments.

This issue tells a slightly re-vamped origin for Bizarro, who is still an imperfect duplicate of Superman but is this time a creation of Lex Luthor’s.  During an early skirmish with Big Blue five years previous, Luthor managed to get a hold of a sample of Superman’s blood and sets to work attempting to create his own Kryptonian/Human army.  After experimenting on a young volunteer, he gets some unexpectedly terrifying results as the subject turns into violent and crazed supermonster.

Unfortunately, if you’re picking up this book to see Bizarro destroying downtown Metropolis while shouting out his trademark backwards talk, you will be pretty disappointed.  What we find in this issue is an experiment that becomes a sort of proto-Bizarro.  Perhaps we’ll get to see the real deal or a version of the one we know and love in the upcoming issues of Forever Evil, but Bizarro #1 serves more as introduction to what the character will be in the New 52.

Writer Sholly Fisch and artist Jeff Johnson handle this task admirably, but are ultimately unable to make the story feel like its own stand-alone piece as other books have managed to do during these events.  Fisch writes some nice moments for Luthor that display his understanding of the character and his voice, while Johnson’s art really delivers in the more exciting moments.  However, by the issue’s end you are left with a somewhat lukewarm experience that may not feel worth the issue’s $3.99 price tag.

Pass on this one.  Bizarro #1’s 3D cover may be pretty eye-catching but most of the information found in this book will probably be explained pretty quickly in upcoming issues of Forever Evil.  There are better “Villain’s Month” issues to be had this week.