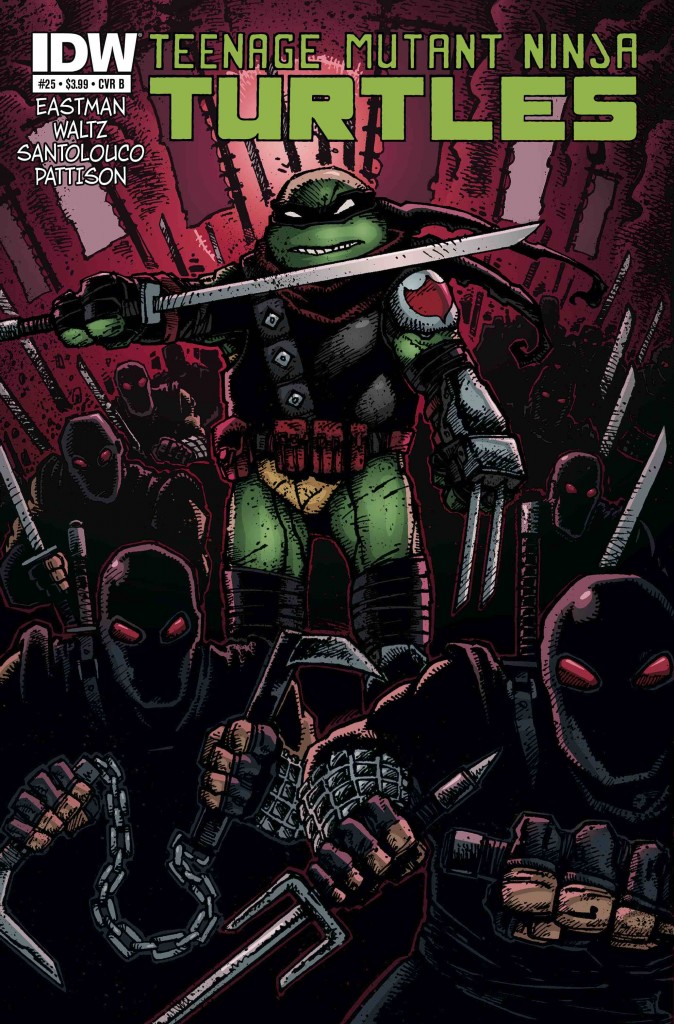 Nostalgia can be a dangerous thing. It can make you hate a perfectly good piece of art just because it’s not how you remember it. Or it can sometimes make you love something mediocre just because it evokes the feeling you had so long ago. Teenage Mutant Ninja Turtles walks a razor’s edge with that sense of nostalgia with every page. The turtles have lived so many lives–in comics, on television, in movies, toys, and video games–and to a degree, they are all separate. The players are largely the same, but the situations and the circumstances vary wildly from medium to medium, story to story. Right now, there are at least three different iterations of the turtles appearing just in comic form, not to mention the popular TV show and upcoming film reboot.

I prefer to think of this title, often delineated by the word “(ongoing)” on comic lists, as the definitive comic running right now. This is because Kevin Eastman, one of the original creators of the TMNT, is so heavily involved in the project. However, it’s also because there is some really good story telling happening here. I was introduced to the characters via the 1987 animated television show, and I can say with confidence that the turtles in this comic series are not what I grew up with. The stories are complex, the emotions rich, and the characters stretched to the breaking point.

Issue #25 is part four City Fall–a street level tale focusing on The Shredder and The Foot Clan trying to take over all crime in the city. There are rival gangs, the turtles themselves, and a good deal of internal conflict in The Foot to overcome in order to achieve this goal. This gang war has already cost the turtles dearly, and in this issue, things are looking grim. The final panel doesn’t do much to alleviate the tension, either. You can almost hear the old TV-show-like DUN DUN and the narrator chiming in to ask, “How will our heroes get out of this one, kids?”

The art throughout the series has been a little inconsistent, and this issue is no exception. Many panels evoke a manga sensibility that would be okay if it was the established norm, but it’s not–not from issue to issue or even page to page. The layouts by Mr. Eastman, however, are wonderfully kinetic and do a lot to make the action sequences in this book something special. Also, a word on the covers: I personally have been collecting the B covers, all of which have been drawn by Eastman, and while the A covers have a very cool theme to them, the turtles still feel most at home under Eastman’s heavy, unpolished hand.

Verdict
Buy it. The turtles feel most at home at the street level, watching over the city from rooftops and alleyways. While this hasn’t been the setting for the entire run of the book, City Fall is right there in the grit and grime, and it’s the best of this series so far. Do yourself a favor and jump back a couple issues and get reacquainted with the Teenage Mutant Ninja Turtles in a way you may not have ever experienced them before.