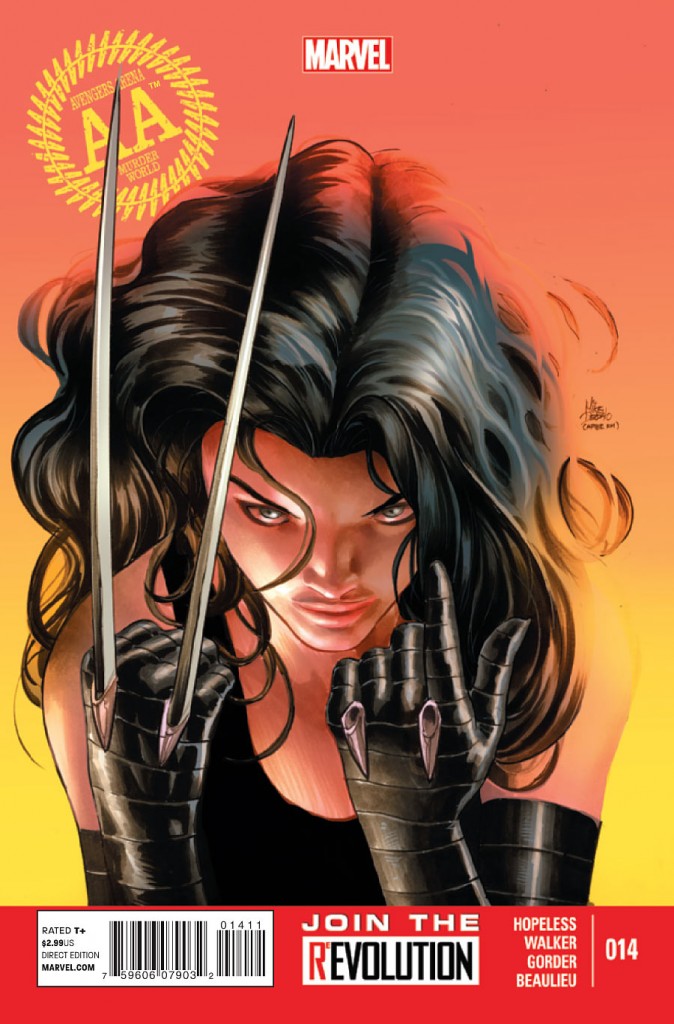 When Avengers Arena launched as a part of the first wave of Marvel Now, I didn’t expect to like it. In fact I wasn’t even going to pick it up, but I seemed to be experiencing some kind of relaunch giddiness so I jumped in. Then I got the second, then the third, and with each subsequent issue I kept thinking, “This will be the one that finally gets me to drop this book.” But that issue never came. Each month, this book held on, never blowing me out of my socks, but creeping into my head and nesting there.

By all accounts it shouldn’t have worked. With characters I wasn’t familiar with, a writer and artist I didn’t know, a villain that is more than a little ridiculous, and a premise that is ripped right from the zeitgeist; it all seems like a recipe for disaster. The book just works and it has been working for 14 issues now. Avengers Arena #14 is the first in a five issue arc called “Boss Level” that will wrap up the Murder World arc. It’s been building for over a year, and I’m excited to see it all come to an end.

It feels like Dennis Hopeless is trying to make sure this issue a good jumping-on point, despite how deep we are into the overall story, and I think he does a solid job. This issue focuses heavily on Bloodstone, a character who until now has not had a lot to do, but who, by the looks of it, will factor heavily into the this final arc. If you don’t know who Bloodstone is, don’t worry–neither did I, and that doesn’t seem to matter with this book. The characters are strong enough and the writing tight enough that we get information as we need it and the rest takes care of itself.

We get a good deal more flashback in this issue than previous outings, which is depicted in frames that have been given an Instagram-like treatment of narrow focus, rounded edges, and saturated colors. They can be a little distracting and hard to decipher, but get the point across. Kev Walker has pencilled most of this 14 issue run, and he’s demonstrating a level of comfort with these characters that has become close to effortless over the course of the story. Many of the heroes have unconventional looks and faces that are obscured behind masks and helmets and yet it’s never difficult to tell what they are thinking and feeling on their faces.

Buy it. Get in while the getting is good. Like I said, Mr. Hopeless has done a pretty good job here of making the beginning of this arc accessible for new readers, and I have the feeling that the end will be something to see. And the final panel makes for a visually arresting lead-in to what will no doubt be an exciting issue next time.