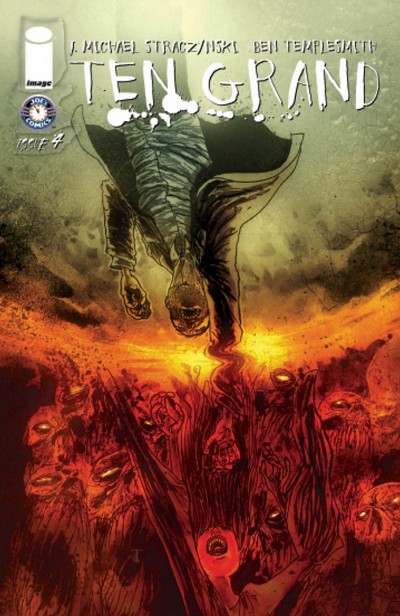 Joe Fitzgerald is a mob enforcer who died (along with his fiancee) while working what he believed would be his last job. An angel spoke to him and gave him an alternative: each time he dies for a righteous cause, he will get five minutes with his beloved Laura before he’s returned to life to hunt down more demons and probably die again. Ten Grand is what it costs to hire Joe to help you out of a desperate situation.

Joe’s love should be waiting for him, in a safe place in heaven, but he’s been receiving clues that things are very bad up there. Laura calls out to him for help in his dreams and ever since Joe was brought back to life, his dreams are straight up messages to be heard. Joe’s angel boss is suddenly unreachable, even after multiple attempts to force her to show up using her ‘symbol’, which in the past has never failed to bring her to Joe’s side. When Joe enlists the help of an eternally sad and lost soul, forever waiting for the pain of unrequited love to leave her in peace, it becomes terribly undeniable that Joe’s angel is gone and Laura may be as well.

He has a secret weapon, and packs it up to head for a place he knows will be the worst he’s experienced yet. Laura can only be one place, because there are only two places souls go when they leave life behind. As Joe beats off demonic bodies to reach the door to the hell, he is forced to pull his wild card. He’s acutely aware that without the connection with his angel, his usual die-and-return-to-life deal may be null and void. The stakes have been risen for him and he’s no longer interested in righteous cause, just in finding Laura and saving her from burning in hell.

Verdict: Ten Grand is a prime piece of comic book steak that you should be drooling over and ingesting at the risk of sudden heart failure. Ok, it’s not that dangerous, but it’s that good. Read it and get off my lawn!