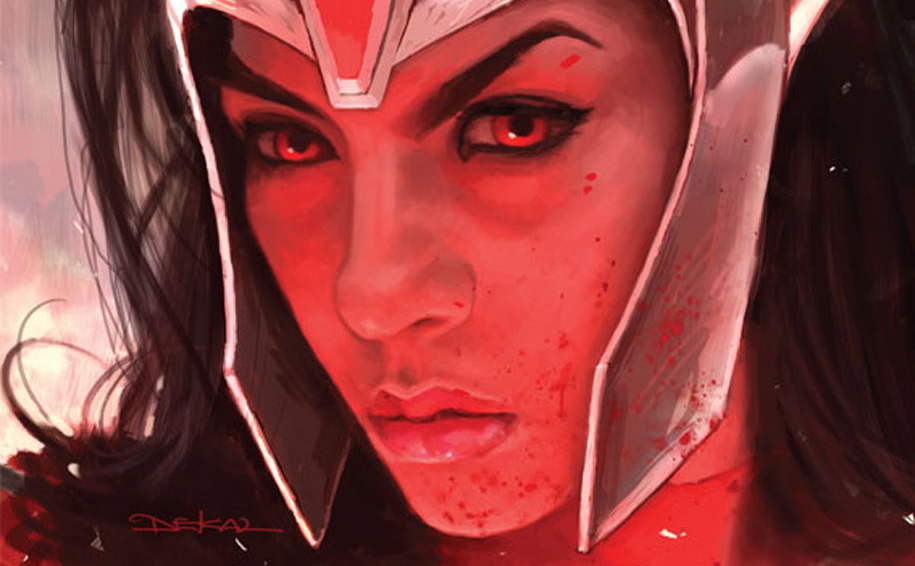 A Farewell to Kathryn Immonen’s Journey Into Mystery

Who’s the sword-wielding woman who’s a soldier on the battlefield and a lady in Asgardia, and no one understands her but her thunder god?

Verily. Can you dig it?

We can dig it.

It is with a heavy heart that I bring you this piece. However, shall we waste these words on mourning the loss of Kathryn Immonen, Valerio Schiti, and Jordie Bellaire‘s Journey Into Mystery? I say thee nay! I propose that instead you find your largest, deepest mug, and fill it to the top with the finest ale in your quarters, and start drinking now, a lot, and for quite some time! For today we celebrate the adventures of the Lady Sif, and her journey into mystery! I still recall the day that I heard that Kathryn Immonen would be taking over writing duties for Kieron Gillen on Journey Into Mystery.  I started clapping my hands and dancing in my seat at the thought of Ms. Immonen lending her very peculiar and creative writing style to the series.  I was so overcome with joy that I immediately began singing the books praises; this was weeks before the first issue had the chance to hit the shelves. I told everyone I knew to pay attention and be sure to pick this book up. Well, I guess only a good number of them heard me, because here we stand at the end of what was surely an exciting, multi-colored blood soaked run of Journey Into Mystery.

If you were to ask me why JIM was cancelled I would ask you to look to the book not having a #1 issue when it premiered. I’m not saying that it’s the only reason, but it certainly didn’t help. There’s something far more inviting about a #1 issue than starting a brand new direction for your series at issue #646. Like it or not that number is sure to scare some readers. It immediately begs you to ask yourself the questions “Is this new? Will I be able to read it without having read the previous issues?” You would think that with all the Marvel Now #1’s selling so well at their start that it would have been a smart move to reset the numbering and give the Lady Sif an even battleground to fight upon. But I digress … I’m not here to go on and on about numbers. I’m here to tell you that if you missed Kathryn Immonen‘s Journey Into Mystery (during its monthly release schedule) that you would do well to pick it up in trade, that is if you like really amazing comic book stories.

I remember fondly the moment I fell in love with Sif. It was issue #646, and Sif was on her way to meet Nidhogg, a corpse eating dragon. Now, I don’t know anyone who would be fool enough to roust a corpse eating dragon from its slumber, but Sif? She walks right into Nighogg’s lair and hurls a human skull directly into his gargantuan snout and shouts “Wake up, Corpse Eater! I would talk with you!” Never once did she flinch. Not one time did her gait falter or her nose wrinkle at the smell of his hot, stinking morning breath. Nidhogg could have devoured her whole in one chomp, but Sif stood firm, and demanded answers to her questions. I sat back in my chair, and exclaimed out loud “Yes! This is going to be epic!” And epic it has been.

Beyond the Fimbulthul. Past the Hvergelmir. Sif enters the Cave of Aerndis in search of a final solution to those who might bring destruction to the Nine Realms. The Lady Sif is tired, tired of watching her people suffer and die. But soon, nay, the next time evil shows its ugly face, Sif will be waiting. For Sif has journeyed into the Cave of Aerndis in search of a teacher that will learn her the ways of The Beserker. With the fire of a beserker raging inside her heart, Sif believes that she will be able to vanquish those who wish her and her people harm – this time for good. Though all is not as simple as it seems when you request such power. Some might even say that the blood lust of the beserker is too much for any man. Well, I suppose it’s a good thing that Sif is indeed a lady, because she’s all about using this power to her advantage. Thus begins the first arc of Kathryn Immonen‘s Journey Into Mystery. What follows leaves a trail of blood, lies, and enough entrails to feed Cerebus the three-headed Hellhound for two eternities.

The second arc of the run shows a far more compassionate side to the series as Immonen introduces Beta Ray Bill back into the Marvel Universe. The weaving of this tale is much like an epic space opera. It involves lost loves, battles inside the vastness of the cosmos, and The Mother of All Things, Gaea. Sif inadvertently becomes a player in saving all of humanity, making this story a perfect mirror image of the first arc. Because, if you remember, at the start of the series we were very much surrounded by death and destruction. Sif was a killing machine, allowing her rage to govern her actions in order to save her people. In this second story we experience Sif attempting to not only save, but to also restore life throughout all the world. I love the duality that these stories share with one another. It’s as if the scales meet right in the middle, neither one outweighing the other in quality and execution. Hear me! Kathryn Immonen‘s Journey Into Mystery isn’t all just about blood, revenge, and gods gone bananapants. JIM is also quite hilarious more than most of the time! Not only are Immonen’s words often clever and snarktastic, but the art of Valerio Schiti and colors of Jordie Bellaire  give the series a vibrant and memorable edge that is unique to any other comic on the shelves. Characters facial expressions are priceless, the creatures are downright menacing, and the landscapes look like a D&D Dungeon Masters wet dream! Each and every month I looked forward to having new JIM art just as much as I was to get a new piece of the story. Kathryn Immonen‘s Journey Into Mystery might have gone the way of Valhalla, but it’s never too late to get your paws on this tremendously fun, action-packed, and hilarious series. The first trade of the series, entitled Stronger Than Monsters is available now, and the second, Seeds of Destruction, will be available November 5th of this year. And rest assured, that although JIM may have met an early end, Sif’s journey is a complete one, and there are no plot points left open or questions unanswered.

So sharpen your sword, fill your skins with good drink, and follow Sif on a journey into mystery through the wackiest corners of the Nine Realms! Whether you’re looking for another powerful female lead, more adventures located across the rainbow bridge, or just a roller coaster of a comic than look no further, Journey Into Mystery is waiting for you!

– A Farewell to Kathryn Immonen’s Journey Into Mystery Soundtrack –

This article was written while listening to the music of Puscifer.

This appreciation piece was written by Steve Seigh – Executive Editor of Talking Comics. You can hear Steve on the Talking Comics podcast, as well as find him on Joblo.com where he writes a featured column called Ink & Pixel. His Twitter handle is @dead_anchoress.