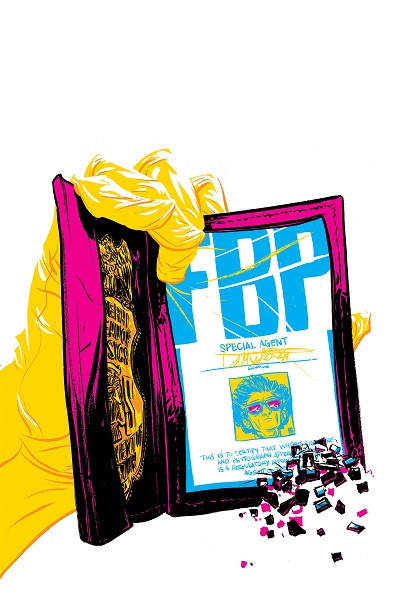 After a quick name-change (Collider had a much better ring to it, but what are ya gonna do?) FBP: Federal Bureau of Physics returns to follow up last month’s stellar debut.  What’s been so charming about this book is how ambitious it dares to be.  From its 90’s snowsuit color palette to its marriage of the traditional federal agent mystery story with sometimes dense science fiction, this is a series that’s hell-bent on standing out from its peers.  Issue #2 stumbles ever so slightly, but the series is definitely still one to watch out for.

This month we find Agent Adam Hardy and his partner Jay being sent to help a group of people caught in a “Bubbleverse,” an almost-but-not-quite pocket universe that mirrors our own.  It’s supposed to be a quick in and out rescue operation but, as to be expected, things aren’t that simple.  Meanwhile, the duo’s boss, Cicero Deluca, finds himself hot on the trail of Jay and his seedy doings.

Robbi Rodriguez and Rico Renzi’s work this issue is just as fun as last time, with the biggest highlight being when we finally get launched into the Bubbleverse.  The duo does an awesome job of making this dimension look almost familiar but tweaked enough to feel strange and somewhat disturbing.  It’s delightfully weird and eye-catching stuff.

In last month’s debut, writer Simon Oliver introduced us to the FBP with a bang, while also fleshing out the world the agency inhabits a bit.  This installment throws us straight into that world, but it doesn’t have the same level of excitement.  We learn about the Bubbleverse thanks to a quick briefing, get some interesting backstory regarding Jay and Adam’s partnership and watch as some mystery begins to unfold, but it’s only in the last part of the book do we get some action.  Mind you, someone essentially being shot out of a canon into another dimension is pretty freaking awesome, but the build-up to what that other world is going to be like was so cool that it would have been nice to see more of it.  This should work to issue #3’s advantage though, as we’ll hopefully get to explore it further.

Buy this book.  While issue #2 doesn’t deliver quite as well as its debut, FBP is still an interesting read with some great mind-bending moments thanks to the one-two punch of Robbi Rodriguez and Rico Renzi.