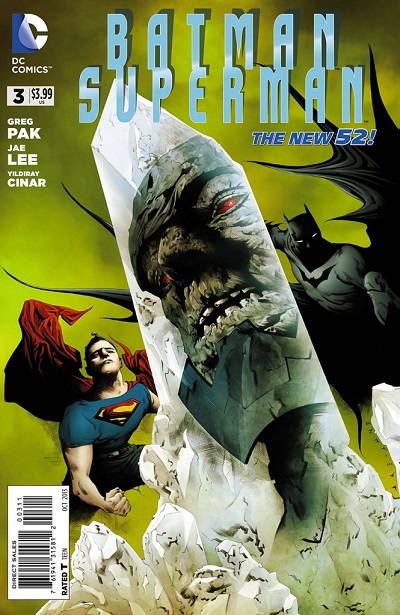 One of the best parts about being a comic book reader is that every Wednesday you know that there is a good chance you are going to be hit with something that will surprise you.  A moment that will make you jump from your chair (and in my case spill coffee everywhere) in excitement, shed some tears, or send your jaw dropping to the ground.  Greg Pak and Jae Lee’s Batman/Superman has been that type of book, something many people were not expecting upon its release just three issues ago.  While the excitement and action were anticipated from the start, it’s the humor and heart that makes this book a delight to read.

Issue 3 picks up directly after last month’s installment as both young and old versions of Superman are faced with the mysterious demon who has been wreaking havoc in their worlds.  After Wonder Woman manages to captures it, the entity warns the older Big Blue that a betrayal is afoot, and it will happen at the hands of none other than his best friend, Batman.  Perhaps more disturbing though is the news that a certain lord of Apokolips is on his way to earth.

What’s great about Greg Pak’s writing in this issue is his focus on the way both Batman and Superman have lived their lives on the outside looking in.  While Bruce is certainly more of a loner than Clark, both of them understand what it’s like to carry secrets and pain that their peers would never understand.  The flashback scenes, which are definitely the highlights of this issue, showcase this connection in their relationship beautifully.  What’s even more fun to see is how much age plays a role in the evolution of their friendship.  It’s hilarious how much the young-buck versions of themselves distrust each other because of their differing abilities and attitudes, while the older versions have come to appreciate those same differences.

Jae Lee’s moody and atmospheric art style is top notch as usual, but it’s Yildiray Cinar’s work in this issue that stands out.  He captures the innocence and naivety of Bruce and Clark’s chance childhood encounter brilliantly in his flashback sequences, illustrating a detailed world that highly contrasts the minimalist one being drawn by Lee.  Though it’s somewhat jarring at first, this marked difference in styles works overall and is a joy to look at.

Buy this book.  This month’s issue gives us a delightfully fun and exciting exploration of the friendship between two of the world’s most iconic superheroes.   Batman/Superman is an impressive offering, doling out plenty of humor, heart and heroics.