If asked to name the longest-running Marvel title headlined by a super-heroine, I’m fairly sure that not many people would choose the Amazing Spider-Girl, but such is the case True Believer! In three of her own books, plus digital publishing, two anthology titles and some side-bar mini-series, May “Mayday” Parker, the “daughter of the true Spider-Man” would swing through 150-or-so issues featuring family drama, high school shenanigans and super-hero adventures, and in so doing create an indelible impression among her readers, so much so that Spider-Girl would receive myriad reprieves from impending cancellation before her story would finally come to a close after more than a decade.

To set the stage, in 1998, Spider-Man writer (and former Marvel Editor-in-Chief) Tom DeFalco and his one-time “Spidey” artist Ron Frenz crafted an “alternate future” tale for What If? #105 that featured the story of Midtown High School student May Parker, the daughter of the former Mary Jane Watson and her retired super-hero (and now police scientist) husband Peter Parker. Set in the “now” of 1998, but in a world where the Marvel heroes had arisen about twenty years previously, Mr. & Mrs. Parker are sitting in the school gymnasium watching the final seconds of their daughter’s basketball game, when in a stunning move reminiscent of Darryl “Chocolate Thunder” Dawkins, May leaps impossibly high and dunks the ball with such ferocity that the plexi-glass backboard shatters to bits! MJ and Peter, although concerned over what could be the emergence of meta-human abilites in their daughter, decide to say nothing and return home to Forest Hills, leaving May to head out with her classmates. The teens’ journey is interrupted by a pumpkin bomb and a message from a thought-to-be-dead figure from the past, who instructs May to “tell your Father that the Green Goblin has returned, and that we have unfinished business…I’ll meet him at the bridge midnight tomorrow”.

Making her way home, May tells her parents of this strange encounter, and Peter tries to sort out who this new menace can be, as Norman Osborn was killed in the battle that also caused the end of Spider-Man‘s career, and Harry has also shuffled off this mortal coil. His suspicion falls on Harry’s son Normie, who has gone missing since hearing of his mother’s (the former Liz Allen) grave illness. May overhears her parent’s conversation regarding their qualms about confiding in her, capped by this from Mary Jane, at which May is aghast: “…I’m telling you she can handle this; she can handle being the daughter of Spider-Man.”

The next day, as Peter tries to find help from the Human Torch and his sadly-absent colleagues in the Fantastic Five, May urges her mother to tell her the whole truth– “You can’t save someone from who she is, or from the responsibility she shares”‘–whereupon MJ shows her daughter a trunk containing Peter’s web-shooters and two Spider-Man costumes, one being “Uncle Ben” Reilly’s. The women embrace, and Mary Jane tells May that her father will, as he always does, make things right “if he can”. Peter keeps his midnight appointment with the new Green Goblin, and with MJ there trying to help, Normie threatens to kill her unless Spider-Man appears. What he gets instead is: 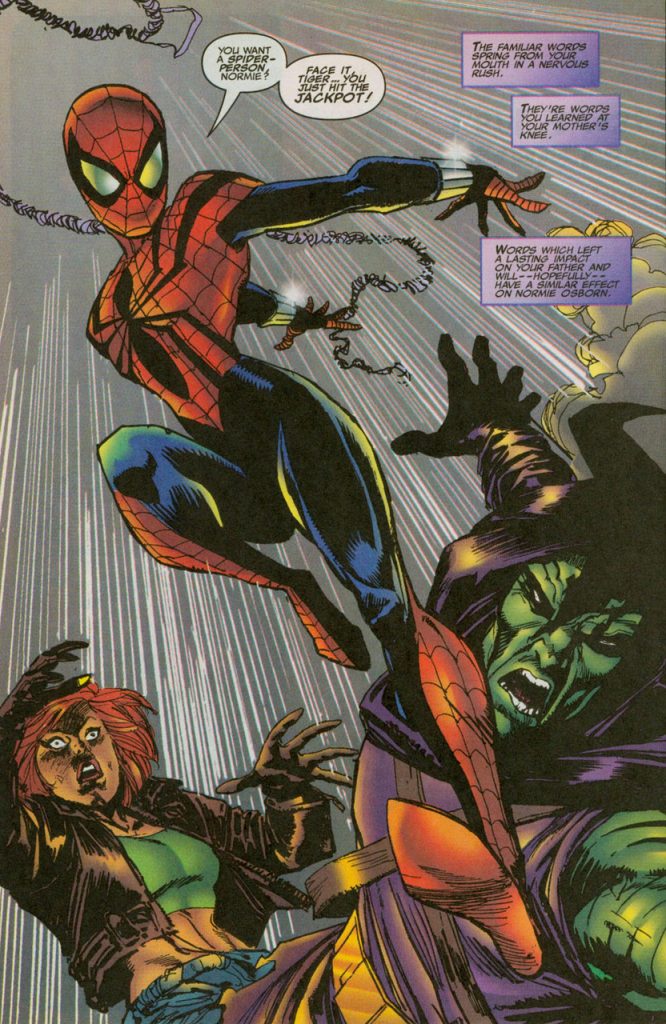 As with most of Marvel’s What If? tales, this was meant to be a one-shot, and the end of this issue had Peter, MJ and May burning the costume, although there was a cryptic “The End?” in the last panel. The reaction to the character was overwhelmingly positive, and not only did Marvel commit to a twelve issue Spider-Girl maxi-series by Mr. DeFalco and artist Pat Oliffe (Ron Frenz would return mid-way through the run), but they would start a new line of comics called “MC2” based in this alternate universe of younger heroes carrying on the legacies of their forebearers. These other titles, first A-Next and J2, then Fantastic Five and Wild Thing, would run their prescribed course as minis, but Spider-Girl would continue on, although not without difficulty.

Despite a rabid fan-base of new, younger readers and veteran comics fans grown tired of the grim’n’gritty fare rampant at the time, low sales plagued the book, and Spider-Girl was repeatedly on the brink of cancellation. To Marvel’s credit, each time fan outrage reached them, they would pull back the axe, and allow the book to remain on the schedule. The curtain would finally ring down at issue #100 in the Summer of 2006…except that May Parker’s adventures would pick up two months later in Amazing Spider-Girl #1, which would last 30 more issues, before being cancelled again! Once more, Marvel would stick by the character, using cross-overs and interesting sales ideas such as digest-sized reprints for younger readers to boost circulation, and also let “Mayday” live to “thwipp” on in two Spider-Man anthology titles, “Spider-Man Family” and “Web of Spider-Man”. Even with all this good will, the finale would arrive in 2010 via a four-part Spectacular Spider-Girl mini-series and a one-shot simply titled Spider-Girl: The End that would wrap the series with a “What If?” tale just as it had begun a dozen years before.

Throughout all the publishing side ups-and-downs, what never wavered in Spider-Girl was the quality of work by the creative team of writer Tom DeFalco and his penciller/plotters, Pat Oliffe through #56 and thereafter co-creator Ron Frenz , who imbued May Parker with a personality cut from the fabric of a genuine teenager, with a hint of anxiety about her place in the grown-up world, but never at the cost of the love and kindness in her heart for her family and friends, and which was even granted to her antagonists, most notably Normie Osborn, and her “cousin” April.

The other side of the emotional coin was always in play, too. May displayed a gumption that Peter’s Aunt May would have adored, and which was never better shown than in #56 when Spider-Girl faced a similar moment to her Dad’s predicament in Amazing Spider-Man #33. Lashed and welded to a submerged anchor by the Serpent God, her oxygen running out and knowing that she wouldn’t reach the hospital with the medicine her pregnant Mom desperately needs, May’s thoughts of her family and friends across a 6-page sequence drive her to a supreme effort: (Pencils by Pat Oliffe; inks by the legendary Al Williamson)

The art was also of the highest quality, whether by the original series team of Oliffe & Williamson, or returning co-creator Ron Frenz, who beginning with issue #67 was paired with veteran inker Sal Buscema, and they would illustrate Spider-Girl through to its conclusion, their run coming the closest of anyone to capturing the vibe of Spider-Man co-creator Steve Ditko’s work without delivering a slavish copy. Both art teams would find the subtleties of expression and body language to convey the nuances and emotional depth that would separate this series from nearly everything on the stands throughout its run, and to portray in the best light the varied cast of characters, who were among the most eclectic in comics in terms of ethnicities, age and body types.

In a book whose focus was equally divided between May’s “real” and “heroic” lives, it was vital that the “civilians” be vibrant characters on a par with the “capes”. With such interesting super-folk as the now-grown Franklin Richards, Shannon Carter (aka American Dream), Black Tarantula, the mysterious Darkdevil, and the enigmatic Kaine, this was no easy task. May’s supporting cast was well up to the challenge, beginning with what to me might be my favorite portrayals of Peter and Mary Jane; in Peter we see that shouldering great responsibility has made him even more protective of his family, and MJ, more mature but still feisty, who despite some misgivings, more than once takes up May’s argument for being a hero. Her classmates are stand-outs as well; running mates Courtney Duran and Davida Kirby, aspiring comics creators Jimmy Yama and Wes Westin, or friendly rival Felicity Hardy, daughter of the now-divorced Felicia Hardy and May’s basketball coach, Flash Thompson. As the series went on, all these relationships deepened, and so as a reader, you truly felt you were walking the streets of Forest Hills or the corridors of Midtown High with these characters; in some ways Spider-Girl is similar to its contemporary Buffy the Vampire Slayer in their depiction of the two worlds their heroines inhabit, an apt metaphor for the coming-of-age process of their young leads.

It was my great pleasure to have discovered this remarkable series as it premiered. Coming as it did during a crossroads for the industry, what with the “Image Revolution” and the “bad girl” books coming to dominate the market, and Marvel themselves having just come off of the “Heroes Reborn” debacle, Spider-Girl was a breath of fresh air. It was a truly all-ages book that told a great story packed with thrills that seemed nostalgic for fans who clamored for Marvel’s past, yet featured a new and fresh lead character whose values you would be proud to show your young daughter or son.

The only way to close this celebration of Spider-Girl is with these words from May herself from the ending of issue #100, where our heroine, bruised but not bowed from a mostly-successful battle, is assessing her situation that includes a gang-land war, super-villains on the loose, suspicious friends, a wary Mom, and a Dad not sure if she’s ready for life as a super-hero:

“That’s just the standard biz when you’re name is May ‘Mayday’ Parker, and you are the daughter of Spider-Man! Sure, you screwed up plenty…and probably will again, but you’ve also scored some successes and saved some lives in the bargain. No, you’re not perfect. That’s O.K., because you’re still a teenager…and it’s a Spider-Girl world!” 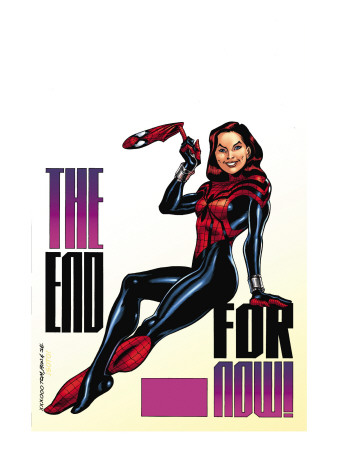 There are some collections, mostly in digest form, but here are the regular issue numbers.

Soundtrack: This piece was composed whilst listening to another young lady who had to find her own way, Joan Jett, and her cover of the Sonny Curtis song “Love is All Around”, most famous as the theme for “The Mary Tyler Moore Show”: