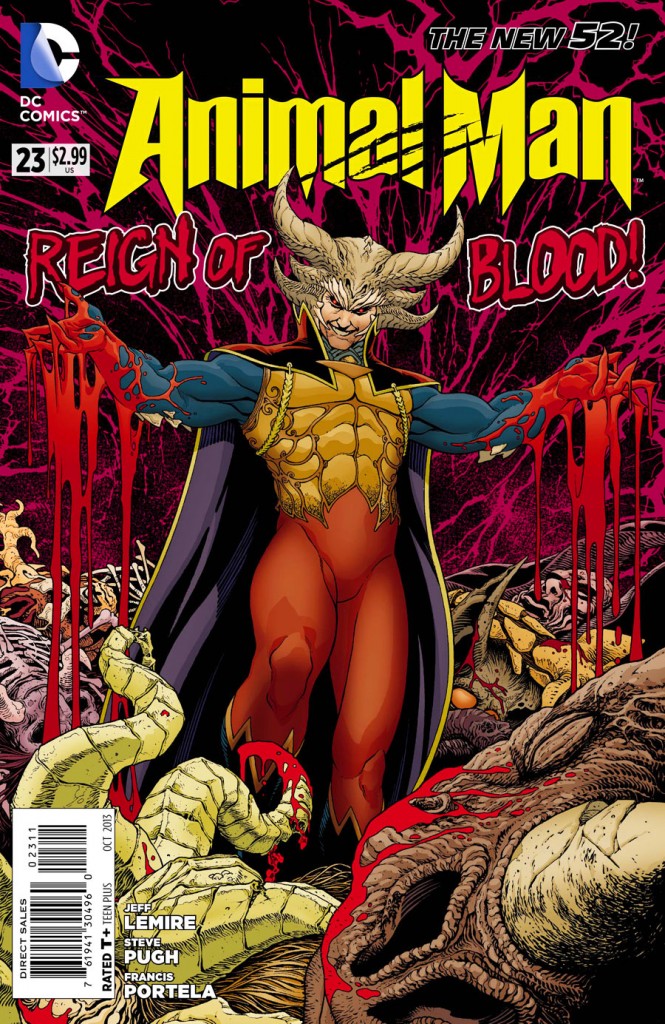 Animal Man has been my favorite surprise of DC’s New 52. Where we are now, two years later, many of the other titles have floundered and fallen away for me, but Animal Man remains consistent and exciting month after month, and it doesn’t look like it’s slowing down anytime soon.

I had two tiny problems with issue #23 that we’re going to get right out of the way. First, this is the one of the weakest covers of the series thus far. It lacks the creepy, sketchy feel that has become synonymous with this iteration of Animal Man. This is disappointing because the book underneath is a true stand-out issue. The second problem I had is that this was solicited as the end of the “Splinter Species” arc. The reality is that it’s really not the end of anything, but rather the beginning of a much larger arc. I’m not sure if the intent behind calling this a conclusion was to wrap things up before the September break for Villains’ Month, but I found myself a little disappointed when the issue ended without any resolution to the story.

Now that we’re done with that, let’s get to the real story: Animal Man #23 is an exceptional issue. The main villain, Brother Blood, is a character that I knew very little about, and a Google search didn’t really help. According to the Wikipedia page on him, he’s been a Teen Titans villain for most of his existence. He’s also, as far as I can tell, never been this scary. Bringing a character who runs an organization called the Church of Blood–and also has a bit of a thing for drinking blood–seems like an obvious choice for an Animal Man story, but kudos to Jeff Lemire for finding this character from the 80s and bringing him into the New 52 in a place where he can do some real damage.

What Animal Man does better than just about any comic on the shelves right now is point the spotlight on the real life of a famous superhero, particularly the family dynamics that come with being a husband, a father, and a hero. And all of that in a very real modern setting where videos of Animal Man appear on “View Tube” and a celebrity obsessed public debates his actions on another social network that looks a lot like Twitter. Buddy Baker’s family is as large a part of the book as he himself, and what is great about issue #23 is that we get to see how each of them has a unique personal stake in the events to come, both inside and outside of The Red. It ends on a masterful cliffhanger that leaves us to ponder while we wait through Villains’ Month, and I can’t wait to see what’s on the other side.

Buy it. It may be the conclusion of this three-issue arc, but Animal Man #23 is also the gateway into the rest of the series going forward, starting in October and reaching far into the future. If you haven’t been picking up Animal Man, now is the time to do so while you have all of September to get caught up.