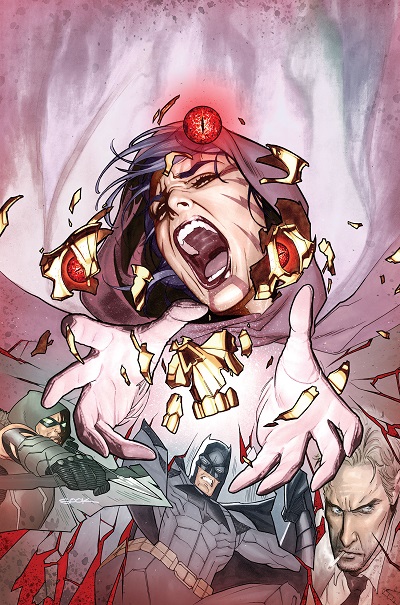 Tie-ins are notoriously tricky in their execution.  The conflict between servicing the event itself while maintaining the narrative and flow of your own internal story more often than not leads to one or the other being sacrificed.  So, when an issue is able to walk that fine line between the two worlds with a grace and ease that makes it almost an afterthought, I personally feel it should be recognized for its efforts.  Such is what we find in this week’s Trinity of Sin: Pandora #3; as it seamlessly adds onto the mythos of Trinity War, while progressing its own storyline naturally.

As the battle rages in the pages of Justice League Dark #23, Pandora is able to see what is really causing all of these heroes to act so out of character:  The Seven Deadly Sins.  Her life mission to stop these creatures of base emotion, she finds herself unable to affect them in their incorporeal forms.  Thinking back on her training though, could the answer have been in front of her all along?  And can she stop these manipulative monsters before the heroes tear themselves apart?

Ray Fawkes does a splendid job of adding on a piece of information that expands on the crossover without being necessary for those who are following one or the other.  Creating an explanation that is both simple and in the atmosphere of his own story, it reads as just the next chapter in the title while crossing over.  Additionally, much like the rest of these ‘mystic’ titles that DC has released of late, it is pulling a lot of its inspiration from the philosophy of yesteryear.  Quoting such minds as St. Augustine and Thomas Aquinas as it delves more into the nature of the foes these style of heroes face.  It’s a welcome addition to these titles, and has added that little bit of extra oomph to the stories as they have progressed.  Grounding this particular tale, the thread of two government agents also continues alongside the more fantastical elements, providing a little bit of levity to the story to keep it from going off the crazy-rails.  All in all, balance is the word that best describes the title to date, and this issue is a fine example of that.

The artwork from Sampere follows that same practice of balance as well.  Keeping the ‘Dark’ vibe that titles such as Pandora live within, he has integrated in the more brightly-garbed capes and costumes of the DCU heroes with this atmosphere to great effect without the disjointed nature one would assume.  Slightly tweaking the interpretations of these icons to allow them all to coexist is no small feat, but it is handled splendidly in this particular issue.  There are admittedly a few facial ticks on the background characters that did leap out on my first read-through, but most of these were found in the chaotic action sequences; leaving the emotional moments of the flashbacks unscathed where those expressions really mattered most.

Check it out.  These new additions to the ‘Dark’ line have a vibe of their own, so if you are enjoying any of the other titles in this wheelhouse you will be happy to see the similar atmosphere here as well.  Those reading Trinity War will find a welcome addition to the storyline, and those just reading the title itself will find the next chapter unphased by its tie-in status.  It’s hard to give higher praise for a tie-in issue than that.