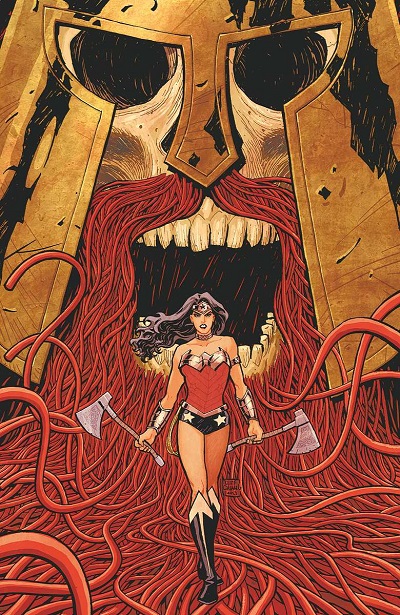 When DC announced that Brian Azzarello would helm Wonder Woman in the New 52, many had no idea what to expect.  Everyone knew that he was a brilliant writer, but it was also common knowledge that his stories were usually dark, violent and gritty crime dramas.  As a result, Wonder Woman became a wild-card in DC’s list of new titles as fans waited to see what this master of the hard-boiled thriller would do with their favorite Amazon.  Needless to say, Azzarello and artist Cliff Chiang have defied all expectations.  Wonder Woman has been one of the most consistent books in DC’s arsenal, giving us monthly doses of dimension-spanning adventure, thrilling action, touching dramatic moments and plain old-fashioned fun.  Its relative lack of recognition and fanfare boggles the mind, but perhaps it will get more attention after this stellar issue.

The showdown we’ve been waiting for has finally come as Wonder Woman and company square off against the treacherous and power-hungry First Son.  As the revenge-driven god attempts to destroy Zola’s baby and seize control of Olympus, Diana is forced to make one of the hardest decisions of her life.

Wonder Woman #23 is pretty top notch as far as story-arc climaxes go.  Brian Azzarello keeps the pace thundering along, treating us to both visceral and emotional payoffs.  While some may not be surprised by the issue’s final moments, it nevertheless stings quite a bit in the end.  What Azzarello has in store for us in the issues following Villian’s Month is anyone’s guess, but it’ll be interesting to see where Wonder Woman and her companions go from here after the fallout of this battle.

Cliff Chiang’s work in this issue is superb.  He handles the action sequences with tremendous skill, making awesome moments like the raising of War’s army and its assault on the First Born’s forces all the more fist-pump inducing.  Equally as impressive is his subtlety in the softer scenes.  It’s hard to imagine any fans of this series not getting a little teary-eyed after seeing the final page of this issue.  In three simple shots he brings us into a quietly mournful moment that is striking in both its beauty and honesty.

Buy this book, and if you haven’t read the issues that came before it, buy those too.  Wonder Woman is one of the best superhero comics being published right now, and issue #23 is its strongest outing to date.