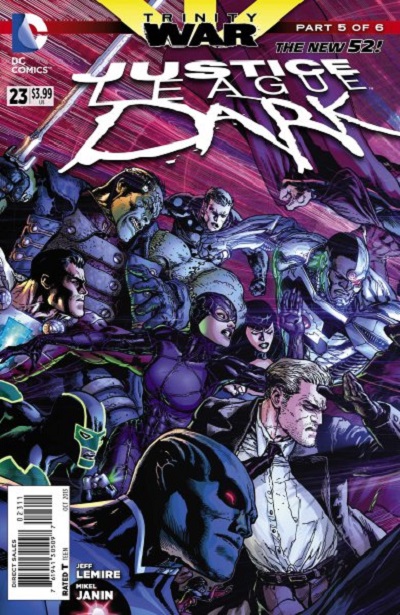 The penultimate issue of the Trinity War crossover hits with a literal bang this week, as the series focuses quite intently on the War portion of its title.  So, without further ado, and just like this week’s Justice League Dark #23, we will eschew the flowery words of my standard reviews and instead just jump right into the meat and potatoes.

ARGUS has been destroyed, the various leads the teams were following have run dry, and something is tearing at the minds of people across the multiverse.  At the center of it all, Pandora’s Box seems to be the key; but can the heroes of the DCU withstand the corrupting powers that also surround the mysterious artifact?  Who will fall to its siren song, and who can possibly contain its powers?  Find out this week in Justice League Dark #23!

Do you like action?  WE GOT THAT!  Do you like to see the titans of the DCU at odds?  WE GOT THAT!  Do you like to see meaningful plot progression in the storyline?  Well, we got a bit less of that.  But to be fair, the parts we did get will have ramifications for some time to come, so it is not without its merits.  An action heavy issue, the various subplots and threats of the crossover have come to their natural head, pitting all of the Justice Leagues against one another with the fate of the multiverse at stake.  As such, this issue will be a treat for some and a mindless delay for others, pending on what your desires were for this crossover.  Being Lemire’s final run at the title, it is nice to see him bring each one of his characters to the forefront though, as each gets their moment to shine in the chaos and shows the unique skills they can bring to a team.  It’s not the style of issue I would have liked to see him go out on, in service to the crossover itself, but it is still a nice farewell from Lemire to these characters.

Janin continues to dazzle with his artwork though, providing brilliant splashes amongst the chaotic battle scenes that really show how sharp of an artist he truly is.  Able to try his pen at a much larger cast this time around with the addition of so many supporting characters, Janin shows that he is up to the task by adding his own personal flair to the designs that have been prevalent in other titles.  And while the issue may have been a little light on dialogue and plot progression for my tastes, the artwork provided does help to pick up the slack as the battle takes place in such detailed style.

I’m torn.  If you wanted to read Trinity War for the inherant conflict between the teams, this is your chapter.  If you were reading for the background plotlines, this one is a bit weaker, but still tosses out two reveals that will intrigue many.  I cannot fault the series for leaving the mystery out there long enough to build suspense, but with only one issue left in the crossover, I am a little worried that it will not have the space to provide a solid cap to the storyline presented thus far.