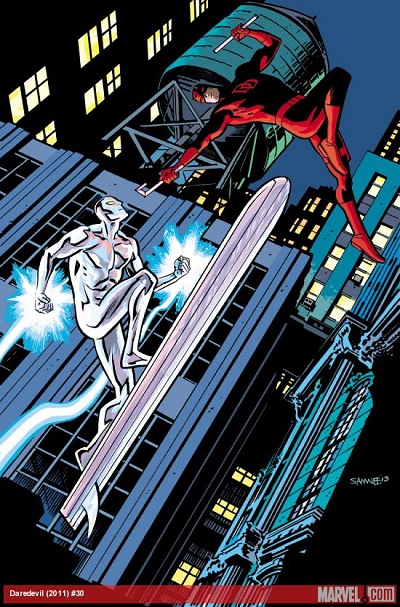 It’s funny how much the extraordinary seems commonplace in Daredevil right now.  Honestly, Matt Murdock could join forces with a crime-fighting, telepathic dinosaur in a three piece suit and we probably wouldn’t even bat an eye.  That’s the charm of this series: you never know what Mark Waid is going to throw at you.  Just when you think you have Daredevil pinned down, it changes like a chameleon into something you weren’t expecting at all.  That is exactly what we get this issue as a certain Sentinel of the Spaceways lands on Matt Murdock’s turf.

Issue #30 begins with the introduction of Mr. Murdock’s unexpected new law partner (and ex-girlfriend) Kirsten McDuffie.  The former assistant D.A. has come to Matt’s aid while his former partner Foggy Nelson battles cancer, making for an interesting workplace environment to say the least.  However, before Matt has time to adjust, he finds a strange visitor in his office in the form of an alien being pursued by none other than the Silver Surfer.

Mark Waid’s blend of wit, comedy and plot-pacing mastery are on full display in Daredevil #30, as we are treated to a rare encounter between the former herald of Galactus and old horn-head.  There are some great moments between these two in this issue and it’s pretty obvious that Waid had a lot of fun writing this brief team-up.  What’s even more impressive is how he once again creates a story that feels fully realized without having to extend it past a single issue.  The done-in-one may be a dying art form, but Mark Waid is doing his best to keep it alive in this series.

Taking advantage of the visual potential Silver Surfer brings to the table, Chris Samnee provides some of his finest work to date in this issue.  The cover of Daredevil #30 is gorgeous and showcases some of the skews in perspective that we’ve come to expect with Samnee’s art, while his interior work is just as vivid.  The scenes of the two flying through New York are the kinds of pages you wanted to plaster your walls with as a kid if you could only bring yourself to cut them out of the book.

Buy it.  Not only does this issue have all the usual fun stuff we’ve grown to love about this series, but it also has Silver Freaking Surfer!  And if you still haven’t taken the plunge into Daredevil, then this month is a great issue to start.