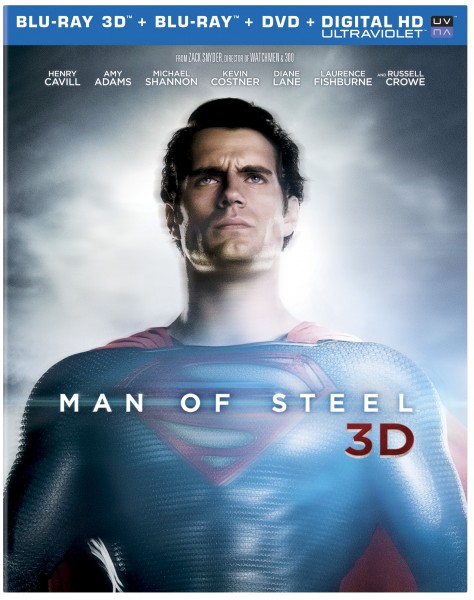 The Man of Steel is set to be released on DVD and Blu Ray on November 12th, and exactly what it will contain has been revealed. It will be available as a Blu ray combo pack, a Blu ray 3d combo pack, a 2-disc DVD and 3d collector’s edition. The latter comes with a metal “S” glyph with a lucite glass stand. Amazon is also offering an exclusive collectible figurine gift set, which includes two 4.5 inch figurines of Superman and General Zod. The combo packs will also include DVD and UltraViolet copies of the film. The DVD release will also come with an UltraViolet copy.

The Blu ray releases will include several special features. On Journey of Discovery: Creating “Man of Steel”, director Zack Snyder and the cast discuss the making of the film and reinventing Superman for the big screen. This particular featurette is described as “feature-length” in the press release. Strong Characters, Legendary Roles explores the iconic characters portrayed in the film. All-Out Action includes cast and crew interviews to discuss the training Henry Cavill, Michael Shannon and Antje Traue had to undergo to prepare for their very physical roles. In Krypton Decoded, the actor who played the 13 year old Clark Kent talks about the Kryptonian tech in the film. Planet Krypton is described as “The world’s first exploration of Krypton and its lost society.” In total, these features will reportedly span nearly four hours.

For those who’re still buying DVDs, the DVD release will include 3/5 of the featurettes: Strong Characters, Legendary Roles, All-Out Action, and Krypton Decoded.

Will you be picking up Man of Steel in November? What do you think of the special features? Let us know in the comments below!