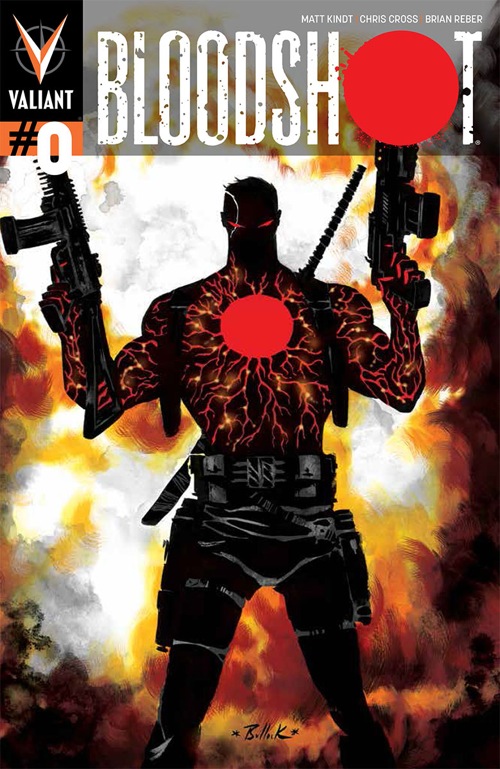 Here’s the deal with Bloodshot #0, it’s pretty darn good. I am currently enjoying all of the stuff that Valiant is releasing, but Bloodshot isn’t a personal favorite of mine. To tell the truth, I was debating on dropping it just to save a little extra cash, but after reading issue #0 I found it offers a fresh (but temporary) creative team, and an even fresher look at the over-arcing narrative of the series.

Matt Kindt takes us back years before the series starts and presents everything through the eyes of Rees, an architect brought in to develop a conscious for Bloodshot. The question that Kindt visits through the entirety of the issue is can a man programmed to be a killing machine have a conscious or even a soul? It might not be an altogether original notion for the series or in comics, but it does fit in with the overall narrative of the series so far.

Ah, there’s that word again, narrative. Kindt isn’t reinventing the wheel with Bloodshot #0, but he’s freshening it up. Almost the entirety of the issue is narrated through the discarded hand written notes of Rees. I give a big kudos to Dave Sharpe and his lettering for making that obvious from the very first panel, and thus doing away with any ambiguity over whether this is an interview, two people talking in a room, or internal monologue, et cetera. It’s a personal recollection of events, and it’s the “hand written” script that adds that personality to the story. It reads like a diary, and contains confessions and questions that are meant to be kept a secret.

Chrisscross delivers one of the series’ strongest issues in terms of art, but it’s the details in the eyes that won me over. The eyes can be a gateway to a man’s soul, and with an issue so heavily concerned with the soul or conscious of a man, getting the eyes done right is crucial.

I dig this issue a ton. Kindt provides an entertaining and thought-provoking intro to the world of Bloodshot for both new and old readers of the series. If you have been wanting to check out Valiant, this is a good place to jump on before the new arc starts next month.