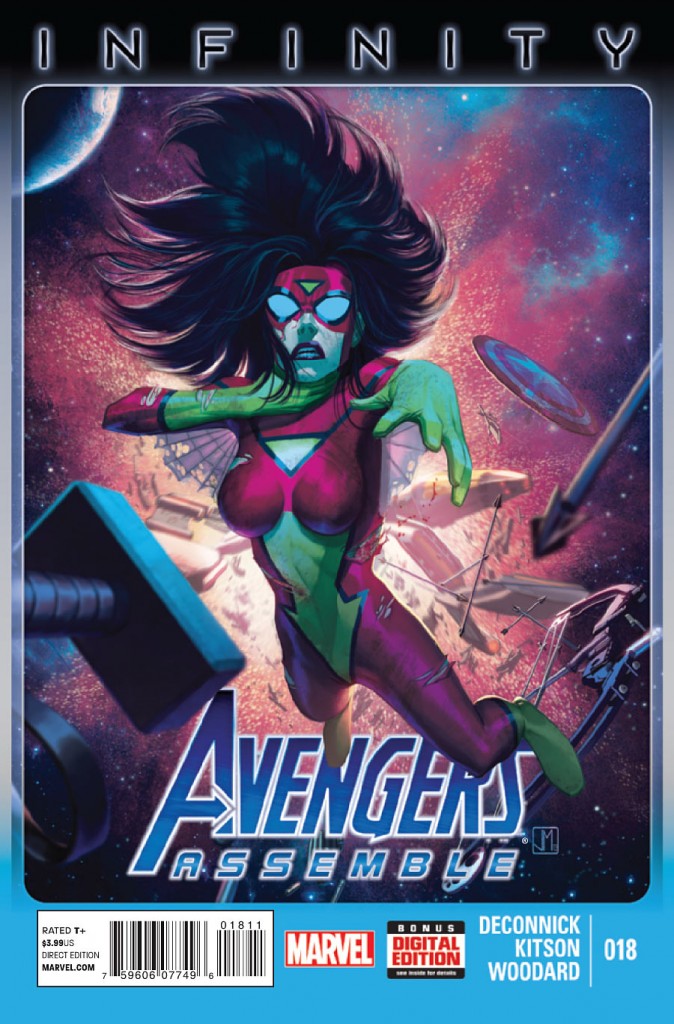 Avengers Assemble #18 is the first tie-in issue to Marvel’s Infinity event. How do I know this? Because a very handy infographic in the back of Infinity #1 told me so. I just have to gush for a minute about how well-organized this event really is. Jonathan Hickman posted another helpful infographic weeks ago that showed exactly which issues were part of the main story, and even their relative position to the main story. All of the Infinity books that I’ve seen thus far are very clear about which issues are coming up and whether they are tie-ins or main story. As someone who lived through the Blackest Night event, where I never knew which books would be relevant and which were just filler, the information being provided by Mr. Hickman and Marvel is not only helpful, but refreshing.

Back to the book: Avengers Assemble #18 is told from Spider-Woman’s point of view as the space war between the mysterious Builders and the rest of the universe begins. The issue does a wonderful job of showing the role the Avengers are taking in the conflict as well as the scope and stake the battle has for all involved. Kelly Sue DeConnick’s signature humor is present here and serves to simultaneously lighten the mood while also making it clear just how out of the ordinary this situation is, even for the Avengers. And, her choice to anchor the story on one character gives us the perfect opportunity to relate to Spider-Woman in what would otherwise be a completely unrelatable situation.

The issue is not without a couple of problems, however. Spider-Woman’s constant joking removes some of the sense of danger that we should feel when the stuff really hits the fan at about mid-issue. Finally, the art in this issue leaves something to be desired. Most of it serves the setting well enough, but many of the panels left something to be desired, especially in Spider-Woman’s eyes, which were often without expression and sometimes out of alignment.

Buy it. Overall, this is an excellent tie-in issue to an event that hasn’t really gotten its feet yet, giving us a lot of needed context. It also introduces an interesting new friendship for Spider-Woman that may have implications for her character going forward.