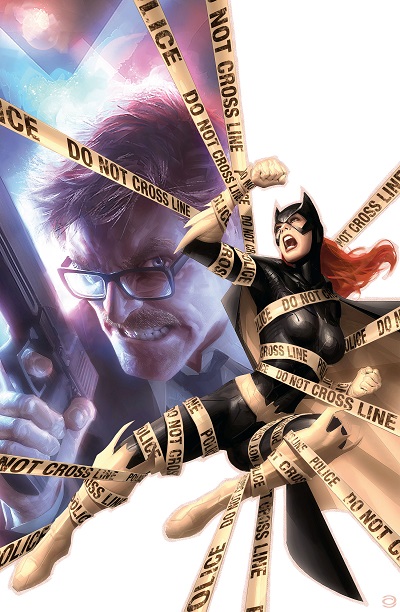 One of Barbara Gordon’s best qualities, something that Gail Simone is nailing down perfectly in Batgirl, is the character’s mixture of down-to-earth believability and incredible strength.  Babs never feels like one of those heroes you would not meet in real life, and what’s more impressive about her is what drives her as a superhero.  She doesn’t risk her life for others because of a tragic catalyst from her past or something equally as dramatic.  Her actions come from a sense of responsibility, from knowing that what she is doing is the right thing to do, and nothing is going to keep her from continuing her battle.  This makes her recent struggles all the more engrossing as that admirable strength and will are put to the test.

This installment, part one in the “Batgirl Wanted!” story arc, gets the ball rolling towards the eventual endgame that has been coming since the events of issue #19.  As Commissioner Gordon begins his hunt for Batgirl, Barbara tries to go back to something that resembles a normal life.  This attempt is cut short, however, when her friend Ricky’s brief gangbanger past comes back to haunt him.

First off, Gail Simone needs to be given props for issue #23’s mall scene.  Babs and Alysia’s harassment by the two skate punks is unfortunately far too real a situation for countless women today.  To be frank, it’s pretty sad that shit like this still happens, that groups of people can’t go about their daily lives without getting accosted by someone simply because of the way they look.  It’s both sad and angering, which makes the little bit of revenge-play at the end with Barbara nearly making the punks pee their pants in fear all the more satisfying.  Simone’s writing in this issue as a whole is top-notch.  She continues to up the tension and stress in Barbara’s life, ultimately redefining the limits of her strength.  It will be interesting to see where she goes from here after this issue’s dramatic end.

In terms of art, the highlight of this issue is definitely Batgirl-newcomer Alex Garner’s awesome cover. Fernando Pasarin’s interiors shine bright too with the issue’s final pages being a highlight, but there are problems at times with certain character’s facial features looking strange or postures appearing unnatural.  Overall, though, he captures both the exciting and dramatic moments quite well.

Buy this book.  The “Batgirl Wanted!” story arc has begun, and it’s opened with a bang.  Gail Simone continues to give us a title that is not only capable of keeping its head above water in a sea of other Bat-Books, but stands out from much of the DC universe as well.