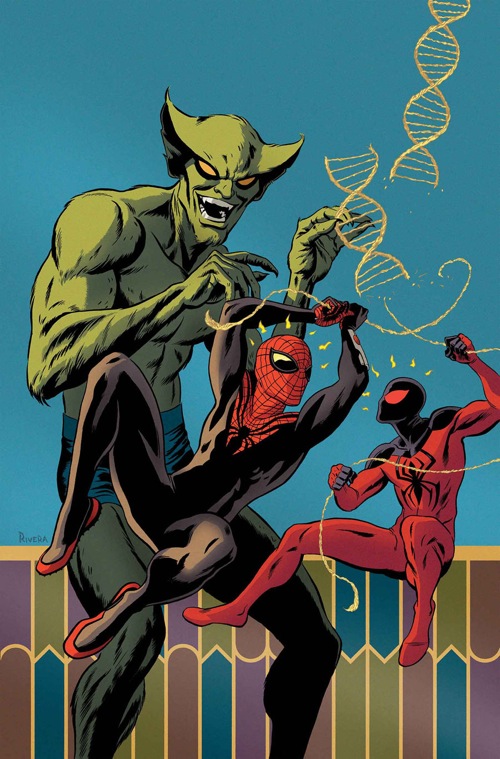 Although this may only be the second issue of Superior Spider-Man Team-Up, Christopher Yost has been handling Spider-Man in team ups for the past two years under Avenging Spider-Man. For many, he’s been integral in helping readers to accept or understand Otto-Spidey. His understanding of both Peter Parker and Otto Octavius is what has made his run in both team-up series a real fun ride.

After my first read through of this issue, I felt that it didn’t live up to the same level of caliber Yost usually brings to the table. It didn’t have to do with any particular bits of storytelling or the art, but ultimately I was displeased with having to pickup a series I normally don’t read to get the ending of the story. After I read Scarlet Spider #20 I felt a little more satisfied with the story. So buyer beware, this is a two-parter spanning two releases this week.

What I enjoyed with this issue of Team-Up was the art from Marco Checchetto. He really gets how the two spider-men move and is able to pose them with ease and fluidity.  Coupled with Rachel Rosenberg’s colors the whole thing is mwaa! (That was my kissing me fingers a la an Italian chef tasting some delicious meatballs.)

Yost provides some insightful dialog between the “brothers” that may end up having consequences in at least one of their solo series. Otto-Spidey was acting on his, not Peter’s, memories of Kaine. From Kaine’s perspective it didn’t seem out of character for Peter to be acting this way given how they parted, or rather how Kaine ran off with Peter’s suit at the end of Spider Island. It was interesting to see that there might be some parallels between Otto and Peter’s feelings towards Kaine.

There are some fun elements to this story, but for those just reading this series, and not Scarlet Spider, you might want to give it a pass. The way things play out in the end looks like it will have more of an effect on Kaine. The art is pretty, so if you’re a fan of Checchetto, pick it up and give it a flip through.