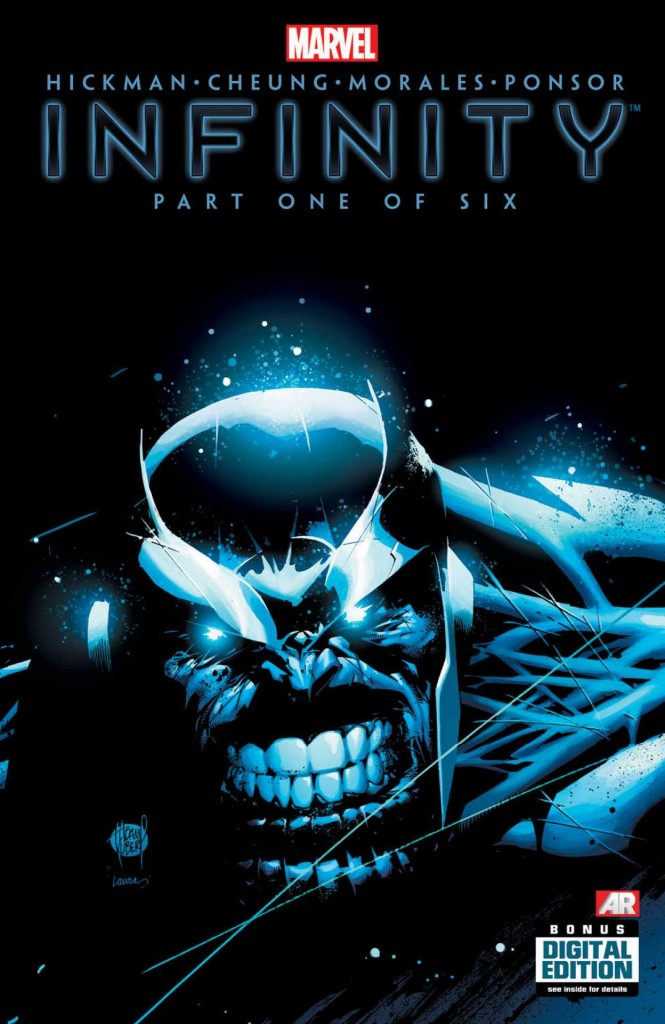 The first issue of Marvel’s latest company-wide crossover, Infinity, sold out at Diamond Comics on the day of its release. Diamond’s the largest comics distributor in North America, and while retailers may still have some copies left, there will be no more coming until the release of the second printing. Marvel released a statement saying the issue’s immediately going back to press, so there shouldn’t be much of a wait for those fans who haven’t got their copy yet.

Infinity  will be a six issue miniseries written by Johnathan Hickman ( Avengers, New Avengers). The art will be done by a rotating team comprised of Jim Cheung (Avengers: The Children’s Crusade), Jerome Opena (Avengers, Vengeance of the Moon Knight), and Dustin Weaver (Avengers, S.H.I.E.L.D.). Of course, like all Marvel events there will be numerous tie-ins.

The prologue to the Infinity began in Avengers #14 and will continue in that title. Other titles taking part include Captain Marvel, Fearless Defenders, Guardians of the Galaxy, Nova, Secret Avengers, Superior Spider-Man Team-Up, and Thunderbolts. Two other four-issue limited series,will debut as part of Infinity: Infinity: Heist and Infinity: The Hunt. Heist will be a four-issue miniseries that focuses on a group of Iron Man villains, while The Hunt will revolve around Hank Pym, Wolverine, She-Hulk and many of Marvel’s teenage superheroes. Fans can expect to see the survivors of Avengers Arena, in addition to some original creations.

Infinity will also birth a new Avengers titled, Mighty Avengers. This team of misfits will be headed by Luke Cage and includes Power Man (Victor Alvarez), White Tiger, Monica Rambeau (formerly known as Captain Marvel and Photon), Falcon, Superior Spider-Man, She-Hulk, and obscure Marvel hero The Blue Marvel. The team will also feature a new Ronin, an identity previously used by Clint Barton and Maya Lopez (aka Echo). Unlike  The Heist and The Hunt, Mighty Avengers will be an ongoing series.

Infinity’s plot has the return of Thanos, while the main Avengers team is dealing with another threat in space. Nova and the Guardians of the Galaxy will tie-in to that aspect of the event. The Mighty Avengers team comes together to deal with Thanos’ attack on Earth. The New Avengers  title will also focus on the Earthbound side of the story.

Marvel has issued statements that Infinity will redefine the Avengers, and the entire Marvel universe. These claims are familiar to all of us that have followed any of Marvels yearly “events.” What do you think of the first issue of Infinity? Do you think the event will have any real consequences for the Marvel universe? Let us know in the comments bellow!