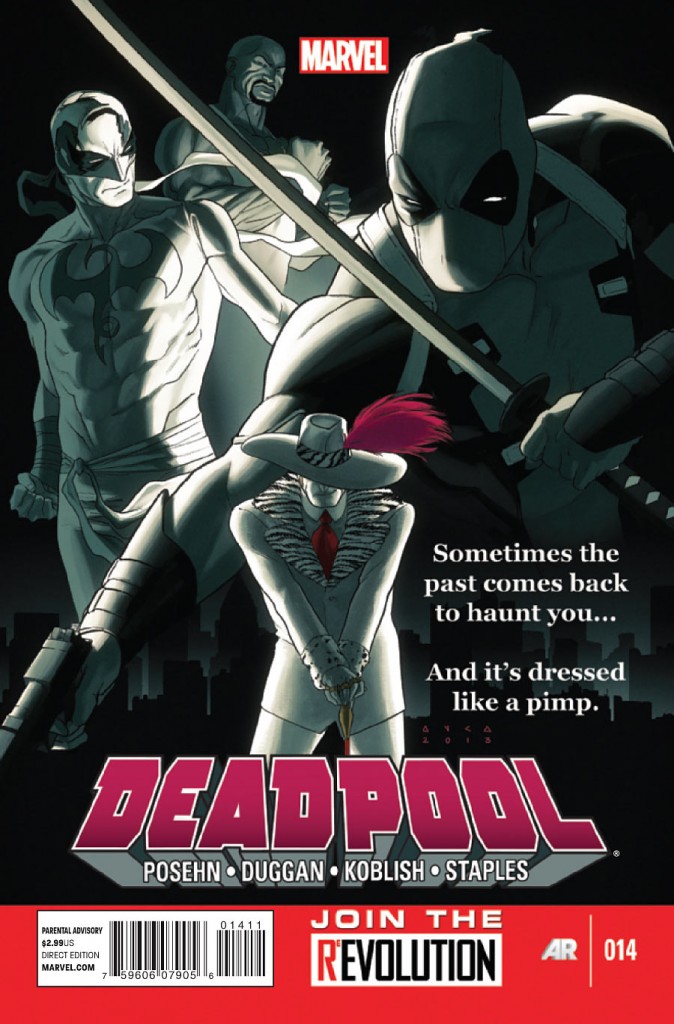 The best way to describe Deadpool since the Marvel Now relaunch of the title is “Hit or Miss.” Posehn and Duggan throw a lot at the wall in this book, including poop jokes, and it doesn’t all stick. It goes from single issues that adopt the look of the silver and bronze age, to dead zombie presidents, to black magic, to usurping demons and even the Heroes for Hire. It’s a circus of fourth wall breaking insanity,with the only constant the book’s Merc with the Mouth. Unfortunately, issue 14 is more miss than hit.

In the previous issue, we got a 70’s throwback style comic starring the invulnerable Luke Cage and his martial-artist partner, Iron Fist. Deadpool decides, after seeing an ad in the paper, that he is also a hero for hire, and thus should be part of the team. Cage and Iron Fist see things differently. Hilarity ensues. The issue was a fun journey into the past that made fun of itself, the time-period, the comics of old, and everything in between. Issue 14 continues the story but brings it into the current day, interweaving the story arc that has run through all of Deadpool thus far with the villain from the 70s returned to haunt the Heroes for Hire, Merc included. What’s missing here is the fun of the previous issue. There are plenty of jokes and lots of gonzo action, but none of the soul that we have seen the book display in the past.

The one thing I can say is that every time I was starting to have a problem with one element or another, the book would suddenly turn on itself and point out that very flaw. When the narration became too bulky and corny, the narrator decided to shut up. When the dialog was getting past the point of funny and into the realm of unforgivable camp, a character would point it out. Even when Deadpool’s incessant fourth wall breaking got to be too much, another character called him out for it. This wasn’t enough to save the issue, however, because calling attention to your flaws doesn’t make them flaws any less.

Skip it. Wait until the next issue. Maybe experimentation really is the name of the game here, and that being the case, not everything is going to work every time. Posehn and Duggan have been doing mostly good work thus far, and if there’s anything I’ve learned in 14 issues of Deadpool, it’s that one bad issue usually means that a better one is just around the corner.